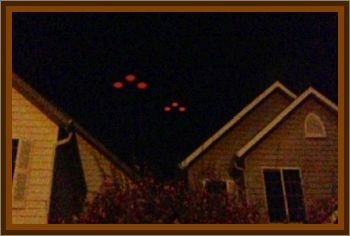 J.H. Martin, instrument maker for National Bureau of Standards, and his 2 sons observed in the sky, 6 lights estimated to be 1000' from the observers moving at a speed of 20 mph with no sound,

And/or a cigar shaped object with 2 fixed red lights, fly above them, just missed hitting the house, disappearing to the northeast.

The lights appeared as 3 pair of lights, and all the lights had the same intensity. They were comparable to a traffic signal. The lights appeared to pass between the barn and the house at an estimated altitude of 100' to 500', they flew in a straight line toward the hills 2 miles away. The lights were in view for approximately 3 minutes.