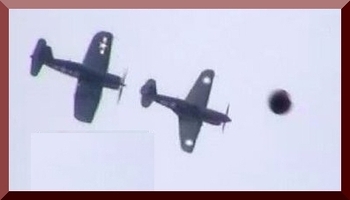 At the Revival air show, 2 World War II aircraft were flying in formation above the crowd when a disk entered the formation in a clear sky.

A British Spitfire and a P-47 were flying in formation, when a disk shaped UFO joined them at 1:35 p.m. Simon, a 29 year old from West Sussex was filming the event with a JVC Hi-8 PAL camcorder and his images are excellent. The maneuvring UFO could have caused a dangerous collision. The footage is crystal clear with zooms to both the aircraft's and the UFO.

The 2 planes, flying in formation and making a turn from left to right are filmed with an unknown brownish object, round in shape that appeared in the scene passing from right to left, close to the airplanes at moderate speed. The images are clear and the unknown object was caught in several frames on camera, the object and it's shape and size was clearly revealed.

A disk shaped UFO was floating making balancing movements and appears to be a metallic structure. Simon and the crowd were impressed by the unknown intruder.

This is the second well known air show that has been joined by a UFO. A stunning video was shown on Ukrainian ICTV and Russian television showing a UFO skimming a Ukrainian fighter jet moments before it crashed into a crowd of aviation enthusiasts at Sknilov Aerodrome killing 84 people on July 27, 2002. The video clearly shows a UFO that is mentioned by the TV commentator, which passed near the descending Su-27 fighter that killed 27 children, and wounded 199.

It was the most tragic air show crash in history.

The UFO that participated in the air show in England fortunately did not cause the fighters to crash. The UFO pilots must be aware that that high quality video is available at most air shows indicating their willingness to be videotaped, and to show they're maneuverability and superiority. Both of these incidents indicate a brazenness and openness not generally shown by UFO pilots