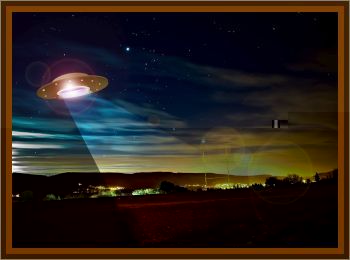 According to an AER Lingus pilot, a huge triangular UFO was responsible for causing panic for the crew and passengers of 2 commercial jet liners en route to Dublin Airport, and considerable damage to one of the jet liners.

As the 737-400 series approached the Slane area, the Midlands Airbus crew observed a UFO taking off from a field with very bright strobe light flashes, as if taking photographs of the aircraft. The crew of the Airbus could make out a triangular shape to the UFO. The UFO began to circle the 737. The crew on board the 737, observing this, experienced a power drain on their aircraft.

At this point, the British Midlands Airbus 330 could observe a purple colored glow surrounding the AER Lingus 737. As the UFO flew in front of the 737, at the same altitude and a short distance in front of it, the captain requested a vector to avoid a collision. Even though they were on a VOR track, ATC gave the 737 an 8º vector to avoid the UFO, as they had the UFO on radar. This is a very unusual procedure, as it upsets aircraft following behind and may require vector changes to all aircraft, incoming and outgoing.

A second encounter on the same night occurred at 10:30 p.m., as an inbound Airbus 330-200 series aircraft, with 213 people on board, was approaching the east coast. As in the earlier incident involving the 737, the Airbus crew observed a flashing strobe light over the Slane area.

As the aircraft throttled back to 230 knots, and at 2,500', the UFO took on a triangular shape. It was now in front of the aircraft, giving off a continuous, very bright flashing light. Again, this effect was akin to a camera flash repeatedly going off. The crew was advised by ATC to vector 10º to avoid the unidentified object.

As the aircraft began to take up its new heading, the UFO began to circle it in a very aggressive manner.

The crew members were terrified, and they expected a collision at any moment with the strange craft, which was estimated to be around 360' long. At this point the captain filed a near miss report with ATC.

As the craft continued with its aggressive maneuvers, the interior lights on the Airbus grew dim, indicating another power drain. At this point, the captain drew the attention of the passengers to the strange craft circling their plane.

At least some of the passengers had already been observing what was happening, and were now beginning to feel panicked. This scenario went on for several minutes. At one terrifying point in the confrontation, the wake turbulence from the huge UFO shook the aircraft violently and activated the wind shear warning device. This also records the stress on the aircraft and pitches it down to compensate and avoid stalling. All through this terrifying episode, other aircraft in the area were observing the encounter and listening in on the radio transmissions between ATC and the Airbus 330.

The Airbus was vectored in on its final approach to runway 10 and, just 2 minutes before it landed, the UFO departed towards the southeast, shooting off into the distance. After landing and completing their flight logs, the crew passed the details of their encounter on to other pilots.

The general consensus was that the area north of the VOR, the general Navan and Slane region, was now an area where UFOs had become a regular occurrence over the previous 3 or 4 years.