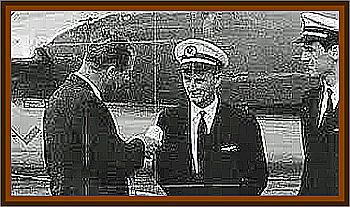 AER Lingus pilot describes strange object in the sky over the south of England.

Captain Gordon Pendleton was flying from Cork to Brussels on board the Aer Lingus plane St Colmcille when he came across the strange object. Speaking at Dublin airport he described what he had witnessed:

We saw a globular object approximately 5 miles ahead of us.

At first Gordon Pendleton thought it was an aircraft but as it got closer he saw that the object had no wings. He then thought it might be a meteorological balloon but realized that the speed it was travelling meant that it could not be a free balloon.

I have no idea what it could be and I passed the report to London Airways.

Although difficult the describe the size of objects while in the air, he says it was smaller than a Viscount aircraft and was travelling at 600 to 700 miles an hour.

Before joining Aer Lingus in 1952, Captain Pendelton was in the Royal Air Force, RAF.