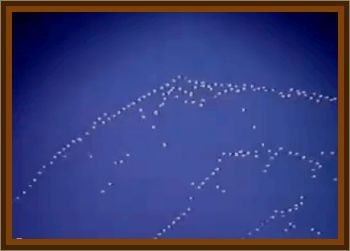 This is all true. In 1956 I was interested in flying saucers and read the books of the time. I was 12 years old. I decided one day to pray to see some.

On May 17, 1956 I was standing against a basketball pole outside during recess, 6th grade. I was waiting but did not know why.

A whole formation of concave on the bottom with a darker center metallic craft appeared in tight Military Review Formation. They were soundless as death and went over the Portland cement plant going north. There were 5 groups of 4 each in offset V's one behind the other.

I carefully noted all details and then started yelling to other kids. Most were playing softball on the other end of the field. A friend I had saw the last group of 4 before they went behind the smoke from the cement plant stacks.

I ran thinking they would come out the other side but nothing appeared except something that had a reddish green glow and seemed to be turning.

We had the report placed in the local newspaper. I received a letter from Civilian Flying Saucer Intelligence in Seattle. I was made Oklahoma State Director.

I also had a friend of my father who was in the Air Force Reserve send a report to the Pentagon and I received a reply from Timothy R. Johnson, Directorate of Intelligence.

Brian Vike thinks I am a liar and has censored me. It was not the last. Read between the lines. That is all I can say.