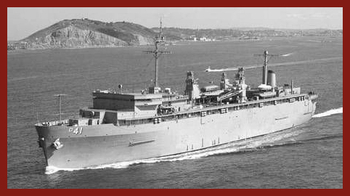 Minimal available information about a USO encounter with a Naval vessel through emails:

Have you ever been contacted about an encounter between the destroyer tender, USS Yellowstone AD-41, and a USO in waters off the coast of the eastern U.S. between 1981 and 1983? The encounter occurred at night and lasted several hours and witnessed by several persons standing duty. Any information you might have would be greatly appreciated.

To anyone who remembers this incident, I would sure like to hear from you for any further details you can add, and to make this a multiple witness case.

You sent me an email with eight questions. This is now my attempt at filling in all I can recall.

Question #1: The date and time of day?

Question #2: Approximate position of the ship?

First time was in February of 1982 during a vicious nor'easter that put ships at risk in the Norfolk Harbor. We left Norfolk to ride out the storm at sea.

The second time we went out to sea, Yellowstone went to Boston over the July 4th Holiday as a show of community spirit. When we returned, we remained in Norfolk until just before October 1st. During that time, we were on maneuvers off the coast of Virginia in an area of the Atlantic, we called the Virginia Capes, VaCapes for short.

The maneuvering was referred to as circle 8s in the VaCapes, which meant we were not really going anywhere just remaining in that area for our obligated time out at sea.

Best I can narrow it down was that it took place during the dark of the moon, and we had to be in dark out conditions at night.

I took my watch in the electrical burn out shop at 11:45 p.m. that night and my watch would go until 4:00 a.m. then I would be relieved and go to bed.

It was about an hour into my watch when there was a commotion and several folks were running down the passageway toward the aft hatch just outside the rewind shop. I went to investigate and had a paperback book in my hand when I went out onto the 3rd deck fantail.

We were illuminated from below.

This stunned the people who were there and the watch was communicating to the bridge of what he saw. I do not know if the Captain, Harry Konkel, had been notified of this situation.

We looked down the side of the ship and could see the sonar swords and the curve of the hull. The light was so bright I was able to read the words in the paperback book and the numbers welded on her hull to mark her draft had shadows.

Question #3: Any idea of approximately how many crew members were on deck to witness the event?

Answer: Maybe four of us. The aft watch, myself and I think 2 others. I don't recall anymore but we were all looking over the side and aft of Yellowstone trying to locate the source of the light. I have no idea how many other people witnessed it but there had to be the bridge crew and the lookouts in the signal shack on the top deck. I could not tell you their number.

Question #4: Can you give an estimate of the size?

Answer: Not quite chlorine green. RGB 127/254/159 or HTML code #7FF99F. I've been trying to find that color for several years in order to describe it to others.

Question #6: Did anyone debrief you or instruct you to remain silent about the sighting?

Answer: The moment the light turned off, I went back to my station and remained there until my relief arrived. No one came to me or spoke about it afterwards even when I asked about it. If they had been told not to talk about what they have seen, I was not aware of their orders.

Question #7: Did the object ever exit the water?

Answer: We did not see anything leave the water. The light just turned off like someone had flipped the switch off on a very large flashlight.

Question #8: Shape of the craft?

Answer: To the best of my knowledge the light was not oval but round and it was solid. No feathering of the perimeter, no spiral arms. It was like a beam of light directly under us that was extremely bright. This was not the result of bioluminescence.

Bioluminescence is faint and fades off as the water calms.

Question #9: While viewing this glow in the water was there any power interruption on the ship or any noise from the object in the water?

Answer: No noise was heard, and even if there I would not have necessarily heard it as I was situated above the screws, the ship's propellers.

Ship's History for this period:

During the NATO exercise Ocean Venture 81, the Repair Department, under simulated wartime conditions, completed over 100 jobs during a 3 day anchorage in Scapaflow, Scotland. During United Effort-Teamwork 84, USS Yellowstone AD-41 completed over 300 jobs, sending Tiger Teams of repair personnel to other ships and providing logistic support by transferring repair parts and supplies and pumping fuel and water to ships of the task force.