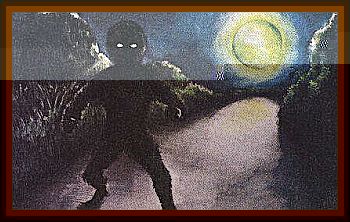 According to storyteller and UFO books author Jean Ferguson, of that area, the following events occurred near Abitibi Lake, between Ontario and Quebec in Canada, in 1939 or 1940.

One Sunday afternoon between January the 8th and 10th, at approximately 2:30 p.m., by a beautiful sunny and very cold day with -60°F. The witnesses are 2 lumberjacks, Hormidas L. and Damase Landry.

They walked on snow rackets in the forest, and exhausted, cut some branches of fir tree to sit down in the snow. They then saw, coming out of the fir trees, an entirely white and enormous wolf apparently looking for something. This wolf stopped within approximately 100' of the witnesses, and sat down in the snow.

Then, very small men in dark green puffy suits emerged from the forest. They were at least 6, and measured in the 2½'. They had small slanted eyes and the yellow skin like Asians, ears like small falling triangles, very small chins, and almost flat heads.

Their members were weak and the fingers were jointless and short. No condensation vapor came out of their mouth. They all were identical, as if they had been manufactured in series.

At their sight, the wolf became aggressive, hair raised, showing his teeth. The small group stopped, their glances went towards both lumberjacks, but as if they did not really see them.

They then looked to the wolf and pointed fingers at it, while speaking between them, very fast, in a language which resembled Algonquin. One of the characters went in front of the group towards the wolf, without being blocked by the snow although he had no snow rackets and only small feet.

He arrived at a few feet of the wolf and raised a hand while saying some words. The wolf reacted by jumping at him, and it started to tear the little being apart, the arms, the legs and the guts, which fell in the snow, without giving off any condensation vapor.

Damase Landry broke a branch and threw it at the wolf and shouted. The animal made a jump and started to run. The other beings spent a good 5 minutes staring at the remainders of their colleague, then one of them pulled out a bag from his clothing and started to collect the scattered remains.

At this sight, Hormidas started to vomit in disgust. When the small being had finished picking up the members of the victim, it stood, went towards the fir trees, followed of the others, and they were lost of sight in the underwood.

The 2 witnesses then followed their trace in the snow, while the humanoids walked too fast to be caught up with, and were at a good distance ahead, visible through the branches. They were suddenly lost from sight, and when the witnesses came where the track ended, they found it ended in a large circle, where the snow had been ejected around. The circle formed like a hollow basin, to the ground.

The witnesses stopped at the edge of this hole, and at this time, they heard like the noise of an explosion. Returned on the spot where the wolf had attacked one of the small beings, Damase L. found a piece of fabric of its clothing and brown blood on the snow.

A report indicates that this piece was similar to a gelatinous rubber, of green color, and that Damase L. tried to split it in 2 to share it with Hormidas, but he was unable to cut it in 2, not even with an axe.

He adds that according to Quebec Ufologist Donald Cyr, the incident probably occurred in 1939, and that Cyr believes is was an actual event since he spoke to family members of the two witnesses involved and they confirmed most of the incredible details.