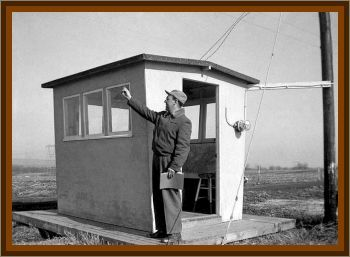 The object was sighted from a Ground Observer Corps post on the roof of a hotel in Aberdeen SD. It was in November, around the 15th. The weather was clear and cold.

At about 4:30 p.m. we stepped out of our shelter building on the roof to get a bit of fresh air. As we walked toward the roof edge we noticed an orange eliptical shape traveling towards us at a fairly slow rate of speed.

When it was first noticed it, it was about 25º above the horizon. It appeared to travel straight south to north and directally above the main street below. As it approached, the shape changed to a more circular shape. when it was directly overhead it appeared circular.

As it continued north, it again took on a more eliptical shape. We returned to the shelter where we called in the sighting to the G.O.C. reporting station in Huron SD, 90 miles due south of our location. The officer taking our report indicated that an object of the same description had been sighted at their location about 3 minutes earlier, it was traveling north. It's shape was well defined against a fairly black winter night sky. Some air glow was present but planets and stars were visible.

Both of the observers were high school students who had signed up to be Ground Observers and were on their normal shift. Although we felt there was little chance of us seeing a foriegn military plane at our location, we did keep good track of all civilian aircraft in and out of the airport some 8 miles to the east of our location.

During the week and during the previous week there had been several reports by ranchers of cattle mutilations so we were especially watchfull for non aircraft in the skies. It was reported on the local radio station that thoses on the north edge of town had also seen the object about the same time as we had seen it a few miles south of their location. This sighting was near the end of a week long series of sightings around the state.