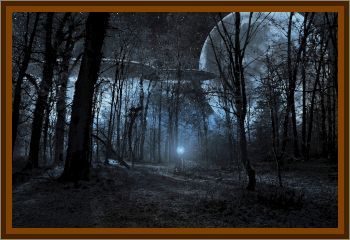 My wife and myself watch a plethora of UFO related shows on TV, not so much for information, we get that by searching the web. We mostly watch for maybe a story one of us has missed. Most of the shows do have good info, Ancient Aliens isn't one of those.

It has more: What If's, Whys, Hows, and there are those who believe statements, it makes it more like a reality show.

They shouldn't be asking those stupid questions, They are presenting the program to an audience, and should be supplying answers to their own questions.

If I were going to produce a show along those lines, I would supply answers, and details, rather than their:

What If's, Whys, Hows, & there are those who believe statements.

Let me explain myself. Firstly, they, they meaning the ancient witnesses, are always referring to God, or better still Angels. What if they misconstrued God for an alien, or however the program worded it.

This is where I may lose a few visitors. I personally believe in evolutionism, not creationism. If there were a God, then why doesn't he give the kiddie diddling Priests a day of reckoning? Instead of the church relocating the pervert, so he can repeat his acts. They represent him. I believe there is a God just as much as I believe Obama is American, or that we landed on the Moon, or Biden won the election instead of cheated.

Ancient Aliens constantly asks the question on how did the ancients know how to do things we can't do today with our technology. Again, this is my opinion only. I feel Americans especially are getting dumber, not smarter.

In time our offspring will be so dumb they will need a course on how to chew food. If the crap ever hits the fan, would they have any idea of how to clean a fish, let alone catch one..or a rabbit, to survive?

My father knew how to do things I will never know. That is knowledge lost in just 50 years. Another example I am using, My Grandmother was German. She made this one dish everone enjoyed. My siblings and myself all have different ideas on how it was made, what it was made of, We all agree it was very good. I've scoured the web, And found nothing close to that recipe. In my memories of it, or my siblings. I've worked with German people, ones who are so German they need to go back occasionally to maintain dual citizenship. I describe this meal my Grandmother made, they look at me like I have boogers coming out of my eyes. They have no clue. Another example of lost knowledge in just 60 years.

Multiply that by thousands, or millions of years, think of the forgotten knowledge. Ancient Aliens always refers to knowledge given to us, or shared by extraterrestrials. Quite possibly our ancestors knew these things on their own. They may not have been able to speak, or communicate, then again, were we there to know?

We only know what our scientists want us to know, the reason for denial on the existance of UFOs and life on other planets. If they let the cat out of the bag, the public would know we aren't the toughest kid on the block. It would be no different than us taking a peashooter to an intergalacic war. We would be at their mercy, whether they lined us up for Blue Plate Specials, or just had us do all their dirty work, enslaved us.

And if Iraq did have a battery in like 150 BC, maybe some kid was just screwing around, and said Gee Pa, look what I just did. Kids do mess aound, at least they used to. I know I did. Why would it need to be some ancient wizard, or alien intervention.

Another tidbit Ancient Aliens tries to make viewers believe is that these Ancient Aliens also tried altering Dinasaurs DNA to make them more as pets than predators. Total bunk.

As mentioned earlier, we only watched the show to get ideas.

Once they presented a topic, we Googled the snot out of it to see how accurate their presentations were. More often than not, they weren't even in the Zip Code, much less the Ball Park.

All the Man Made structures they attempt to make viewers believe were built by aliens, The Nazca Lines, The Pyramids, Stonehenge, the list goes on and on. We always talk of good old American ingenuity, Ancient Aliens seems to present that the Dumbing Down of the human race has been going on since the beginning of time, possibly before. They need to give our ancestors some credit. Obviously our ancestors forgot more than we will ever know. The staff of writers for Ancient Aliens, are obviously not the coldest beers in the fridge.

When it was said that the Gods, again that religion thing, came down to Earth in fiery chariots, why not be more up front, They witnessed a UFO.

Another item I'm not agreeing with, This isn't associated with Ancient Aliens, I'm just throwing it in for food for thought, is reverse engineering of crashed craft.

Again, I don't believe we are remotely capable of it. I'm thinking if they are built for interstellar travel, they would be built a tad bit sturdier than what we are capable of. A Husky Mechanics Tool Set 1025 Piece with allen keys and 10mm sockets wouldn't cut it. I'm thinking the aliens would use more seamless technologies.

I'm also believing they would incorporate some type of self destruct device, so it couldn't be useful if it fell into the hands of us, or any other planet or race.

Don't get me wrong, I'm not saying Roswell never happened, I'm positive it did. What I'm saying is any remnants recovered were more than likely junk the occupants weren't concerned about. Not unlike when North Korea captured the USS Pueblo (AGER-2) in 1968, and the crew tried their best to destroy any sensitive equipment.