Craft Flying Low Over I5 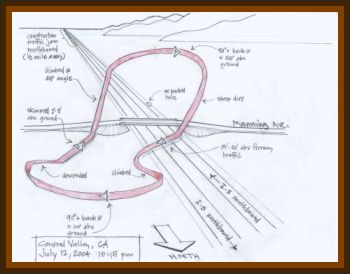 My family and I embarked on a road trip from the San Francisco Bay Area to New Mexico.

While travelling south on Interstate 5 in the central valley of California, at about 10:15 p.m., we encountered the I-5 UFO phenomenon that has been reported to NUFORC several times since at least the year 2000.

It was a triangular aircraft flying a repetitive aerobatic pattern over the interstate and swooping down very low over traffic, creating a hazard to all who were driving.

We saw it as we approached from 2 to 3 miles away, and were amazed at it’s agility and audacity right from the start. It occurred 28 miles north of Highway 198 at the intersection of I-5 and the overpass of Manning Avenue.

The aircraft’s maneuvers were incredible, but not beyond human capability.

The craft flew a fast, distinct, unchanging pattern over the interstate and overpass, swooping down to an unbelievably low level over the freeway traffic. We and every other vehicle around us slowed down to observe it, and once underneath it, we hoped we wouldn’t get hit.

We drove past the overpass, which was remote and had no exit/entrance ramps and then parked on the shoulder about 300' South of it, right below the pattern that the aircraft was flying. My wife and I tried hard to get a good look, but it was very dark, no moon and no city lights anywhere near us.

The craft seemed to be triangular, yet not an equilateral triangle. It was shaped more like a Vulcan bomber, the wings formed a wide delta, yet their leading edge intersected the fuselage well behind the nose. I could not make out the profile of the nose, yet I could see the profile of a vertical tail fin. The vertical height of the fuselage seemed thin, but not too thin for a human pilot.

It’s lights were completely unconventional, no strobe, no red and green position lights, no navigation light.

It just had 3 big bright circular halogen white lights, about 12" to 18" in diameter, one under the nose, and one at each wingtip. The nose light would turn off and then turn back on.

They all shined down and forward about 45°, and were built into the body, they weren’t fixtures hanging down.

They put out an ambient glow onto the fuselage, which was a very pale tan or grey. There were no other markings and no landing gear visible. Unlike previous reports of this phenomenon to NUFORC, which described a silent craft, and I don’t discount them, this craft made a lot of noise. In fact, it sounded like it had a single jet engine.

As it approached, it made a whining, hissing sound, which turned into a roar as it passed, yet not as loud or fast as a corporate or fighter jet.

The craft maintained a speed of about 80 mph to 100 mph throughout it’s maneuvers. A high performance engine might explain how it made steep climbs and 90° banking turns without stalling or losing speed.

It flew a repetitive kidney bean shaped pattern above the freeway intersection with the overpass. It dived down and flew 15' to 20' above the I-5 traffic, climbed up, hung a U turn, then dove down to the field on the East side of the interstate, and flew an amazing 2' to 3' above the ground for about 300' until it approached the embankment of the overpass, then pulled up and climbed at about 45° without slowing down to about 200' above ground, hung a sharp U turn banking at 90° to the ground,then dove down again at the interstate, and repeated this pattern over and over. Whether the pilot was an off hours yahoo crop duster or an alien, he was out of his mind.

While parked on the shoulder, we watched the aircraft fly the pattern right over us several times before driving off, my 6 year old daughter was getting scared.

I wish I could provide a more definitive identification of the aircraft, but it was very dark that night and the craft was constantly making sharp moves, banking, climbing, and diving. My best guess is that this was a powerful, unconventional, yet terrestrial airplane, but the pilot was performing maneuvers that weren’t just bold, but crazy and malicious toward the traffic on I-5. Everything about the aircraft’s actions and lighting was illegal.

I called the California Highway Patrol after driving away, and the dispatcher shrugged it off, saying:

I’ll put out a bulletin, but there’s not much we can do. You might want to try the FAA.

I’ll forward this report to the FAA in the hopes that they might look into it, being that this incident constitutes crimes being committed with an aircraft. Either this is some rogue crop duster that hasn’t been caught yet, or this area along I-5 is definitely a UFO hotspot.