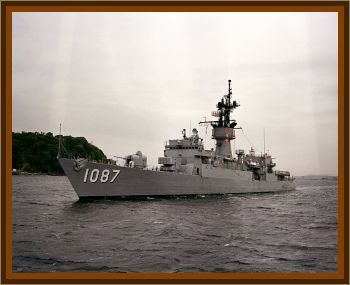 From 1989 thru 1992, I was an operations and intelligence petty officer in the United States Navy. In the fall of 1991, I was stationed on the USS Kirk FF1087, in Long Beach, California.

From October 1991 thru January 1992, we were part of a drug interdiction force, along with three other naval vessels.

Our primary mission was to track, contact, intercept and take control of low flying aircraft, drug carriers, coming out of Columbia, Panama and Guatemala. On occasion we would intercept, board and seize sailing vessels, which we knew were drug carriers.

Similar to the movie Clear and Present Danger, we were in direct communication with a DEA special agent on land, which would contact our ships via a secured and encrypted communication device. The actual call sign of our agent on land was Iron Manvel.

As an operations specialist, my primary duties took place within Combat Information Center. CIC was the central nervous system of the entire ship. Within CIC, we could fight, navigate and control the entire ship. CIC was manned 24 hours a day, 7 days a week. On the USS Kirk, there were roughly 22 Operations Specialists. We would work in two, 11 man shifts. Each shift would last 12 hours each. We called it a port and starboard shift system.

At approximately 2:00 a.m. on December 16th, I was on CIC Duty. There was literally nothing going on within CIC, and all ships within our group were sailing as noted above.

The air and surface radars were clear, with the exception of our sister vessels steaming in line. As things were quiet and slow, I took the liberty of departing CIC and made my way up to the ship's bridge.

During the evenings, naval ships sail in a status called darkened ship. All lights on the exterior of the ship are out, and the only lighting on the bridge is contained dark lighting from radar scopes and navigational devices at the helm. During this time of night, a junior officer would be in command of the bridge and he was referred to as the officer of the deck, OOD. On this particular evening, the OOD was a good friend of mine, and he and I were having a discussion about a football game.

Then, out of nowhere, like a huge flash from a camera, emanating from the starboard bow sea level upward was a huge flash of red glowing light, which lit up our entire ship. It only lit up our ship, not the surrounding ocean, just our ship.

It happened so fast, that the OOD, the navigator and I were speechless for about 5 seconds, at which time I looked at the OOD and asked him if he just saw that light. He stated yes in a sullen voice.

I then asked the navigator and he replied yes.

I then took the navigator’s sound powered headset, and asked the forward and aft look outs, if they had just seen the same red flash, to which the forward look out stated: Yes! What the Hell was that?

At this point I looked at the OOD and asked him if we should wake up the captain or as we would call him, The Old Man. The OOD sat there stunned for a minute, as did I and everyone else.

What had just happened did not make any sense. The flash emanated from the sea, directly off of our starboard bow, like it was touching our bow, and ascended upwardly so rapidly, creating the effect of the bright red flash.

The other weird aspect of this event was that only our ship was lit up within the red flash, not the surrounding sea, but our vessel only.

The OOD elected not to wake the captain, and the entire incident was logged in our ship's log as an unexplained phenomenon.

Up until this event, I did not believe in UFOs or USOs. I have no doubt that our ship, steaming along at 12 knots, came right up on a submerged unidentifiable object. I don’t think the craft/USO had any idea we were sailing up to them. I think whatever it was, took off in a very unplanned and fast manner, and wanted to quickly identify us, thus the flash.