Don't Go Out At Night And Always Beware The Devils 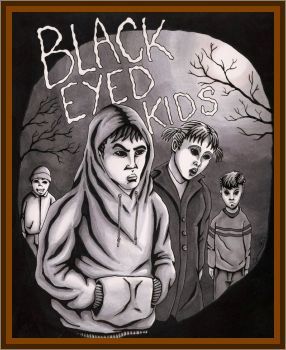 My story begins when I left my moms house. I had gone over to visit because my father, her husband of 63 years recently passed away, and mom wasn't taking it too well. I knew she needed support form her loved ones, and I was more than willing to go visit and keep her company, but it was getting late. My mom lives in the suburbs. Tidy lawns, plenty of neighbors, paved roads, and even though it was near 11:00 p.m. when I left, the streets were extremely lit by the streetlights that always had your safety and ease of mind at heart. These lights only lit the road though, and glancing across the street, the houses were cast in an eerie shadow. Even a rather safe, charming little neighborhood can seem spooky and uninviting when cast in shadow. I admit, I was terribly chilled.

Sliding into my car I revved the engine and waved to my mother who was standing in the doorway, wrapped comfortably in a warm shawl. She waved back, her old and fragile arm shaking. I saw her mouth ‘be careful' and I smiled, backing out of the driveway. I turned out of the neighborhood, deciding to take the back way, the shorter way, home tonight. In hindsight, that might not have been a good idea. I live a significant ways away, out in the middle of the country in the old farmhouse I grew up in, which my father had left in my name when he and mom had moved out, into a place smaller, more easy to care for and affordable…And social. My father, had always told me, growing up “don't go out at night and always beware the devils.” He was a strong believer in anything and everything paranormal, a very superstitious man, and I always had to resist the urge to laugh at his words, but I knew he meant well.

Driving down the dark country roads, there were no streetlights, and the half assed paved road was cracked and filled with potholes. The fields on either side of the road were empty, just blank stretches of overgrown grass and untended shrubbery. The dark outline of the trees of the woods could be seen looming all the way across the fields on the shadowy horizon, one might have even seen a deer or two once in awhile in those fields, but not tonight. The moon offered little light, as the sky rolled with dark threatening clouds, ready to burst with rain or a storm at any moment.

Sure enough, a few moments later, the low grumble of thunder sounded, heavy and long. However, no rain fell just yet, much to my pleasure. I hate driving at night, and in the rain…And putting those two together would end badly, I just knew it.

Accompanied only by the occasional roll of thunder, I started to feel a bit anxious. I cant explain it, I just felt shaken up, probably because it was night, and it could start raining. Or maybe I had been reading too many ghost stories and legends, and tonight seemed to reflect the mood of the stories I read almost obsessively. To try and calm myself, I flicked on my old cars radio and turned the old fashioned knob back and forth, slowing down a bit as I attempted to find a station that came in clearly. Nothing doing. Weird. There was a broadcasting tower right near here, it usually came in perfectly, clear as day. But still, nothing. The white noise and static of the blank stations was doing nothing to appease my anxiety. I gripped the steering wheel tightly as more thunder boomed from the sky. Aggravated, I forcefully shut off the radio, gritting my teeth. Glancing down at the dashboard, I noticed I was nearly out of gas.

Groaning, I search the road for a sign for gas. As I was scanning the side of the road I noticed from the corner of my eye two figures walking on the side of the road, shrouded in shadow. They were walking slowly, one turned around, walking backwards, his or her thumb sticking out. I felt compelled to pull over, give them a ride, and I found my hands turning the wheel slightly, but I pulled back, realizing how stupid it would be of me to accept two random strangers into my car in the middle of the night on a back country road. I sped up and passed them, trying not to look at them as I did so, though I felt oddly intrigued by them. As I focused on the road ahead, it started drizzling, dropping my mood another level or two. Along with the rain, the thunder seemed louder, closer, as the storm moved in. A few seconds passed until I gave into my compulsion to look at the two figures, and I glanced in my rear view mirror. It seemed as if the two were walking faster, and the one no longer had his thumb out, but it had to be my imagination, how would I be able to tell if they were walking faster or not? It was rainy and dark…

Looking back at the road, I almost missed a sign that alerted me of a gas stop up ahead. A sigh of relief passed my lips and I slowed down, looking for any indication of the stop, pushing the thought of the two figures from my head. Soon I was pulling into the gas station slowly as the rain started to pick up. The store was closed but luckily they had a 24 hour gas pump service. That was good for me, as if they had not, I'd have run out a few more miles down the road. I shut off my car and hesitantly shuffled out of the metal shell and glanced over my shoulder, still not being able to shake that nervous feeling that had manifested inside me earlier that night. I stood under the light of the overhang, trying to figure out how to work the pump, which seemed so over complicated in the dim light, and with my mind not being able to focus on this simple task. The rain picked up more, heavier and louder against the concrete of the gas stop as I finally was able to get the pump into my car, forcing my hand to stop it's shaking. I had a horrible feeling that my shaking wasn't just because of the bitterly cold night air. Suddenly, the overhang lights of the gas stop started flickering wildly, a couple going out altogether. It seemed as if the temperature dropped twenty degrees in a few seconds as I glanced around, a sinking feeling starting to blossom in my stomach. As if in slow motion, I turned around, facing back towards the road, the long lonely road and saw what I expected to see there. But even as much as I knew what I'd see, I still felt the drop of my stomach, the color draining from my face and I breathed a sharp, cold breath forcefully as it almost caught in my throat.

Across the street the two figures were standing, facing me. They started crossing the street slowly but surely and I fumbled with the gas pump. It had only been a few moments, but it seemed as if the gas pump was taking its precious time. I was shaking hard now, as thunder boomed once more, and I looked back up. The figures were now at the entrance to the gas stop and my breath was quick and shallow, as I blindly shoved the pump back into it's holder, not being able to tear my eyes away form the figures. As they drew closer, I became more frantic, even though, now as they walked into the flickering light of the overhang, I saw they were just two teenagers. They looked ragged, and frigid, and soaked from the rain. I straightened up a bit, still terrified, but another compulsive feeling, similar to the one I experienced in the car was bubbling, and I felt obligated to talk to these two. Though, I insisted to myself to just drive away, not to risk anything.

They were extremely close now, at the next pump when I slid into my car, shaking wildly, and fumbled for my keys, cursing myself as I dropped them on the floor. Leaning down, I swiped them up and sat back up, a cold, sickening feeling as I came face to face with one the teens, who had his hand on my window, knocking slowly, but forcefully. I rolled down the window a bit, just a bit, no bigger than to allow maybe a small child's hand through. Before I spoke, he spoke first, the other figure standing in the background, still, but I could see something of grin there on her pale face.

“Can you give us a ride into town? We missed the bus and dont have a ride.”

He spoke slow, and something about his voice made me shiver, a cold chill swept down my spine and I opened my mouth, but no sound came out. Clearing my throat I glanced at the dashboard, and at the keys in my hand.

“I-I'm sorry, but I'm not going into town.” I stuttered, keeping my eyes down, not at the kids.

However, the teenager knocked harsher, and made me jump a little, as he insisted another time for a ride. I told him no once more, and looked up, trying to seem intimidating, which seems silly, trying to seem intimidating to a child, but a horrible, chilling sight greeted me. I looked the kid right in the eyes, and gasped sharply, my back hitting my seat as I went to back away. He had eyes, oh he did, but they were blacker than the night, pitch black. No discernible pupils, and no white whatsoever showing, pure black, deep, brooding, and surprisingly intriguing, but my fear got the better of me and I quickly turned the key and my engine revved to life. I thanked God, which I had never, ever done before tonight, my car had not stalled and went to pull away and the kid banged on my window with a pale fist, screaming for a ride.

I took off speedily down the road, apologizing to my father again and again I had laughed at him, never took his warnings seriously. After a few more minutes, I pulled into my driveway and right into my lawn, in front of my porch. I didn't want to spend any more time outside than I already had and jumped from the car, leaving the car door open, and ran inside, slamming the door and locking it, even going as far as to put a chair in front of the door in case someone, or something tried to get it.

Sinking into the chair in front of the door, I shivered uncontrollably and started to cry, hiding my face in my hands as two dark figures stood at the end of my driveway.