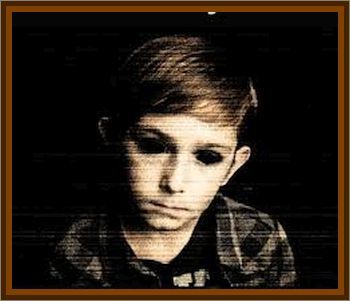 A knock on Paul's front door pulled him from work. He stood from the desk in his home office in a small North Dakota town and walked downstairs. He didn't find what he expected, Not remotely close.

Paul found a young boy who appeared to be about 16 or 17 standing on his front porch. The gaunt teenager wore almost threadbare corduroy pants & dress shirt that hung off his body. The boys black, unkempt hair hung lifelessly around his face.

He asked Paul about a Chevy Tracker that he had sitting in front of his garage with a 'For Sale' sign on it, He spoke very clearly and slowly in a rather monotone voice. It was like he was trying to force his words to make a point to Paul. He never said anything threatening, he only asked Paul to tell him about the vehicle.

But there was something odd about the boy that set Paul on edge.

Paul felt uneasy from the get-go, but proceeded to tell give him details about the Chevy, talking about the vehicle, He tried to figure out why the boy's presence set his nerves afire, then discovered why. He noticed his eyes were jet black. They had no pupils or irises. Paul was taken back immediately.

At that moment, Paul saw the teen wasn't alone. There was a second youth there with him, standing at the end of the walk that leads to my front porch to the front of my garage. The girl stood 15' to 20' from him. She looked to be about the same age or maybe younger. She had blonde hair that also appeared unkept, and was wearing an old, faded dress. The girl didn't speak, and she never took a step closer. She just stood at the end of the walk, smiling. Paul couldn't tell if her eyes were the same as the boy's, but looking back, it wouldn't have surprised me if they were.

Paul continued talking about the vehicle, on alert, and ready for any sudden movement from either teen. After he finished telling the boy about the SUV, he asked Paul if he could take him for a ride in it. Again, Paul felt very uneasy and said that he was busy. The boy again asked if Paul could just take him for a ride so he could see how it worked. He never said US, so as to include the girl. It was always ME. Again, Paul declined. The boy kept asking for a ride, alone with Paul. During the conversation, Paul never once mentioned the price of the vehicle, and the boy never asked about it. He only continued to ask that Paul give him a ride in the Tracker so he could, see how it worked. Those were his exact words.

After a few minutes of pleading, Paul said he had to leave. Paul told him that I was very busy and needed to go, and then slammed the door shut and locked it. It wasn't until Paul went into the kitchen to get a drink that he realized just how scared he was. His hands shook so badly he couldn't open a can of Pepsi. After a few minutes, Paul began to relax, took a drink, and called his wife. He told her what had happened. While Paul was talking, He looked outside to see if the pair were still there looking over the SUV, but they were gone.

Paul eventually asked his neighbors if they had seen the teenagers, but none of them had, nor had they seen them in the area before. Paul hoped it stayed that way.