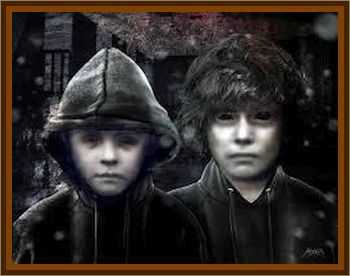 Some black eyed kids came to my door. I was alone in the house, playing guitar when this long knock came to the door. I could see through the curtain on the door that it was kids, and living in a neighborhood with several families with kids this was nothing out of the ordinary. Yet before I even opened the door I began to feel very wary.

I opened it to find 2 kids, around 10 or 12, standing on my porch. The taller boy had knocked, the smaller had been straddling a bike. I found this odd that he was on my porch on his bike. He would have had to carry it up my front steps, and instead of standing beside it, was sitting on it.

At first they kept their heads down, and I said:

They said they just needed to come in for a minute and it wouldn’t take long.

I asked if they were from the neighborhood, and they didn’t answer.

It was about this time that I realized something wasn’t right.

Much went on before I finally finished my experience with these kids. But I can tell you that without a doubt, yes, they are real. They are evil by nature and that you do not want them around you, near you or able to touch you.

I still have nightmares, and an awful sense of dread thinking about them and wondering why I had been chosen.

My honest belief is that they are demonic. Perhaps a human/Nephilim crossbreed.

The entire eye is black, not just the pupil,cornea. Their skin looks white like the belly of a fish. And they smell of sulfur and dirt or death.

They are telepathic as during my encounter I had thought:

And the taller kid looked at me with those black eyes and said:

You know he isn’t real don’t you’?

I believe the reason their are no stories of what happens when people let them into their homes is because those people are no longer here. I also feel that The Loud BOOMS heard globally are connected to these beings arrival and departure. I wont go into any more detail simply because it freaks me out knowing this happened to me and I live wondering if I’m being stalked.

Will I be here tomorrow or a prisoner trapped in their dimension tortured for 1,000 years or fed on.

God only knows and I pray daily for his protection. It's terrifying living day after day with this.

If you encounter them, do not open the door.