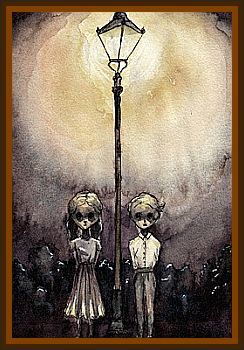 Initial reports of what has been termed Black Eyed Children or Black Eyed Kids, have been popping up since the mid 1990s.

It seems like the phenomenon started in the United States and the UK and has spread to other parts of the world.

The scenario is rather similar wherever it is experienced.

One to 3 elementary school age children will show up at the potential victim’s door, lost, hungry, needing to use the phone or the bathroom.

They tend to speak in a monotone voice. It could be a boy or girl or combinations of boys and girls who show up.

They are never accompanied by adults or animals of any kind.

These mysterious visitors never physically force themselves into a home, but always ask permission to enter.

They always knock, even if there is a doorbell.

Their primary objective, it seems, is to get into the house. It is unknown what they do if they are granted entry because there have been no reports across Mexico or throughout the world of anyone letting them in.

They are pale skinned and their hair color may vary but their facial structures are always even and their complexions flawless.

Their features are Caucasian and never appear in the forms of other races. Often, these strange kids are wearing handmade clothing or clothes from another time period.

They initiate their contact looking down or looking away. When they first make eye contact, the person they are facing is often filled with an intense feeling of horror, as if their appearance is accompanied by a potent form of malevolence.

The eyes of these children are completely black with not a single sliver of white or color from the pupil.

Soon after revealing their black eyes the kids usually disappear, leaving no trace that they were there.

This phenomenon seemed to have spread slowly out of the U.S. and England and now can be found in other parts of the world.

In Mexico, the children have been called: Los niños con ojos completamente negros.

Sometimes Mexican paranormal researchers use the term Los Beks, a Spanglish twist of the English abbreviation for Black Eyed Kids, B E K, or bek.