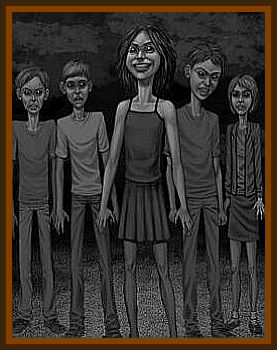 In the opposite end of the Mexican Republic from Tijuana a spate of sightings of Los Beks occurred in Mérida, the centuries old capital of the state of Yucatan.

According to an article found in Milenio Novedades, the sightings began with 2 appearances of the kids in 2 different areas in the city, in the México and Xibalbá neighborhoods.

In each case, the mysterious kids appeared on the doorsteps of private homes asking for water and if they could come in the houses. The children in both cases fit the standard black eyed kids description and caused great distress in those who experienced them.

Juana Solís was at the graveyard with her 3 daughters leaving flowers at the tomb of a relative who had recently passed. A small boy with black eyes approached them asking for water. When they turned around, the boy had disappeared.

Later that day, a man identified as Pedro saw 2 kids fitting the appropriate description in the same cemetery but he had no interaction with them and they vanished as quickly as they had appeared.

There are dozens of theories as to what the Black Eyed Kids actually are.

As this phenomenon has cropped up and spread in the mid 1990s, some allege that it is an early version of what is called:

The word creepypasta comes from the combination of 2 words, creepy & copypasta, the latter term first coined on 4chan to denote a doubtful story that is copy and pasted all over the internet. So, one of the biggest theories about the black eyed kids alleges that it is just an urban legend that has gone wild because of the internet.

If we are to believe these people who have come face to face with these mysterious beings, what could they be? Are they physical or something more paranormal, like ghosts?

Are they interdimensional beings? If they are really flesh and blood kids, what explains their appearance, their actions and their motives? Some claim that Los BEKs are alien/human hybrids sent to earth to mingle with humans.

Their awkward mannerisms may indicate beings who are not entirely familiar with human civilization.

Are they normal human kids, possibly kidnapped, subject to some sort of medical experiment or mind control? That theory would not explain the uniformity in skin color and features, however. Also, the total blackening of the eyes would not allow light to enter the eye and would thus make vision impossible.

Are they related to the alien race better known as The Greys? With big black eyes and pale skin, the black eyed kids vaguely resemble the legendary race of spindly, big headed, ashen skinned nefarious abductors.

Their sightings are not connected with UFOs or anything else, so it seems. Most of the black eyed kid sightings happen randomly to random people. As this phenomenon has been studied intensely in the past few years, researchers have been looking for patterns but have been unable to find any.

Many believe that the kids represent a type of psychic vampire, in that they inspire fear in those who see them, and somehow inspiring fear is their nourishment. There is a similarity between the black eyed kids and the vampire legends in that the kids ask to be let into the house and seem like they can’t do anything without an invitation.

So the story goes, the CIA during the Cold War wanted to weaponize the occult and recruited a Catholic priest from Nebraska to summon demons to be used by military intelligence against America’s enemies abroad. As with many genie out of the bottle stories, the demons could not be controlled and so they slowly spread among the Earth.

This would serve to explain why these mysterious children started showing up first in the United States in the 1990s and then in Mexico about 10 years later. There is no physical evidence of the visitations of the black eyed kids and one has never been caught for questioning or study.

All that we have are eyewitness accounts, rumors and stories of stories in a friend of a friend sort of way.