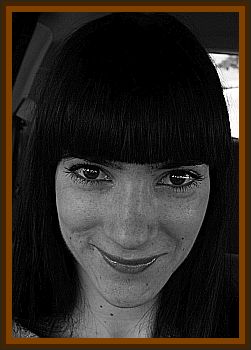 This experience totally happened to me in January 2015. I didn't even know what a black eyed kid was at the time.

I was always a night owl, into playing video games, surfing the net and reading books well into the night.

At that time, we were living in a 3 Plex condo, in the center unit. All of them were 2 story, a few miles outside of town and sheltered in isolation just off the old highway. So it would’ve been really difficult for somebody to walk that far down to our development and know whose porch to approach…

It was about 2:00 a.m. and it’d been storming big time on the Oregon coast that night. The wind was whipping through the area and we'd had sideways rain going on for days.

I was sitting in my room with a little stained glass lamp on, that wasn't much brighter than a night light. I was also burning a candle. The house was perfectly quiet and appeared to be asleep, except for me.

That's when I began to hear our front, screen door creaking. It sounded like it was being slowly and carefully opened. Whoever was out there at that time of night, in those conditions, seemed to know about the squeaky door and was trying to open it as quietly as possible, about an inch at a time.

I kept listening for the sound making sure it wasn't the wind. But I kept hearing a little hinge creak, and then another creak, until it was obvious that it was very deliberate.

Whoever was out there doing this, knew exactly what they were doing. And for whatever reason, chose not to ring the illuminated doorbell right next to the front door.

All of this was going through my mind in rapid, terrifying detail and freaking me out to the real threat that I was about to be confronted by a very bold intruder.

I breezed around the corner of my room, which was on the bottom floor, closest to the front porch and made my way toward the door. I didn't know what to expect, but I knew somebody was definitely out there.

My husband at the time, was sleeping upstairs and probably passed out cold. He was a doctor, who was always on call and kept long hours, so I hesitated to wake him, or get the police involved until I knew for sure what to report.

I stood silently in front of the door, armed with my phone and a baseball bat, waiting to see what, if anything would happen next.

Roughly 2 minutes later, I saw the front door knob being turned slowly, like someone was trying to manipulate the door open. It was locked, but since whoever was out there had taken the time to quietly get that far, I felt pretty confident that they were about to take it much further.

The old front door we had at the time, didn't have a peephole. It just had this little bit of glass over the top of it, that only a 7' tall person would be able to look through. My only alternative, was to look through a side 3' long, by 6' narrow window, just adjacent to the door. I kept the lights off and slowly tried to move the little curtain just enough, to peek out onto the front porch.

As soon as I did, I was shocked to see a figure cloaked in a hoodie, staring straight back at me. I was overcome with a feeling of dread and panic.

At that point, I flipped on all the lights inside the house and yelled through the door:

Who are you and what do you want?

There was no answer. I repeated myself and asked:

Are you injured or is there someone I can call for you?

By then, it was at least 2:30 a.m. There was still no response. So I ran around quickly and made sure the windows and back doors were locked. I also went to the top of the stairs, to look out the hallway window to the parking area, to see if there were any strange cars or any other figures hiding out in the darkness. I couldn't see anything unusual, anywhere.

I ran back down to the front door and yelled:

Finally I heard what sounded like a woman in a monotone voice say:

I need you to open the door and let me in…

I was dumbfounded and choking on fear, but I asked her why, what was wrong and if she needed me to make a call for her? I asked if she was hurt? But I got no reply. So I informed her that my husband was home and sleeping upstairs. I told her I would wake him up and started yelling for him.

She interrupted my shouts with a cryptic, robotic reply:

I'm not hurt. I need to come inside… I have something to give you.

I was flipping out of my mind by now, but I pulled the curtains all the way back on the side window, turned the front, porch light on and asked her to show me through the glass.

She turned around and I could see that she was holding this perfectly coiffed, long haired Pomeranian, wearing a beautiful, purple collar that had a gold, fancy medallion with the dog's name, engraved on the front. She must have known that.

At that point, she said to me:

I’m here to give you back your dog. Let me in and I'll give him to you.

That's not my dog lady. Look at his collar. My dogs are right here with me.

And both of them were sitting right beside me, standing guard, but keeping strangely silent.

She said again in her creepy way:

I just want to give you back your dog.

It felt like I was in the Twilight Zone on steroids… I said:

Look at the dog's tag. Where did you find this dog? That's not my dog, but I will make a phone call to its rightful owner if you tell me the number on the tag.

I was becoming more concerned about the dog, being a devoted, dog lover and the fact that this disturbing person wasn't actually its owner. She didn't move and I noticed that the dog she was carrying, was being unusually still as well. It wasn't acting upset, anxious or trying to get away from her. It didn't make any sense.

It was the most peculiar situation I’d ever seen. But the feeling was ominous and dark. I started looking carefully at this woman so that I could give details to the police, in case she took off with the dog.

I could see that she was a thin younger woman, or possibly a late teenaged girl. She had straight, dark hair, covered by the red hoodie she was wearing and a dark pair of blue jeans on.

It was impossible to see her eyes. I reached into a nearby coat closet for a flashlight. Just then she said:

If you would just open the door and take a look at the dog to make sure it's not yours, I'll leave.

I grabbed a knife from the kitchen, held my phone tightly and walked back toward the door. My dogs never moved. I figured I'd take a close look and slam the door if I had to. I figured if she was unarmed, I might have a chance of grabbing the dog and getting him to its rightful owner.

So I said to her:

I've got my phone and I'm ready to call the police if you try anything. Step back from the door and I'll take a look at the dog.

I pulled the front door open slowly and took a long, careful look. The dog appeared to be exceptional and perfect, like it had just come from winning first prize at an AKC dog show. It was obviously someone's prized pet and not just a stray dog she found, or one I'd ever seen around before. I told her it wasn't mine, Again.

As I did, she took one step toward the door and I noticed she was holding something in her left hand behind her back, while her other hand supported the full weight of the dog. She kept looking down at her feet and remained silent.

I asked her to put the dog down. As I said that, she glanced back toward the road and the parking area. But I didn't see anyone or any cars there. I asked her again to put the dog down and leave the front porch area. I said I would let the dog in as soon as she did and would get it back to its rightful owner.

At that point, she looked up at me and seemed to stare right through me with her cold, dead, penetrating eyes. I have never seen anything more bizarre in my life. Her eyes were jet black and her hollow stare was fixated on me, like I was being examined or called to some kind of a challenge? My hands were trembling and it was all I could do not to throw up.

She didn't seem drunk or on drugs of any kind. She seemed surreal and in my mind I kept thinking of the Grim Reaper. I was hearing the words to the Lord's Prayer and struggling not to make eye contact with her.

There was something very unnatural and menacing about her eyes, her intensity and her odd, calculated, cold behavior. I couldn't figure it out. I shut the door and started screaming for my husband to come downstairs.

He finally came down. I yelled to him:

Hurry, There’s somebody standing on the front porch. She's got someone else's dog. She keeps saying it's mine. I think she's carrying something behind her back. There's something very wrong with her. Be careful.

I called 911 as he opened the front door. But she was already gone and there was no sign of her anywhere. We even got in the car and drove around. The police couldn't find her either, and they couldn't find any reports on a missing woman or a missing dog anywhere in the state…

The incident haunted me, so I decided to research lost pets with that description and any reports of women or girls like her in the area, that might've been reported or listed nationwide. But I couldn't find anything.

Curiously, the only thing that kept coming up, was a new sighting of the so called Black Eyed Kids in the Portland, OR and North coastal area where I was living at the time. I'd never heard of anything like that.

But when I saw the pictures that other people had posted and read some of the similar, chilling reports, my heart froze. She looked exactly like that. I don't know what else I could tell you. But I'll never forget it.

I'm not sure what her purpose was. But I feel like she targeted me because of the fact that I was isolated and known for having my dogs with me everywhere… I would do anything to protect a dog or a helpless animal.

Somehow I think she knew that. But it'll always be a creepy mystery.

Her eyes were unmistakably the same. I think this is more than an urban legend. There's something else going on here.