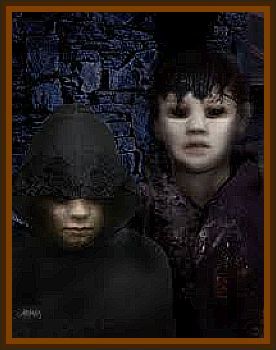 This one time I was walking home from work & found myself escorting a young lady to her car. She asked me to escort her, hoping I'd talk her into a drink or two, I had already had a few myself, I'd get a number or possibly get laid that night. I'm not going to lie, she was kinda hot.

No shit though, she looked scared.

I kept walking with her & was trying to at least coax out of her what she was so worried about. She would only comment about some really creepy looking kids who were following her. Being we were in the Downtown Seattle area, this could amount to anything.

So we kept walking & talking, I kept looking behind us to see if the little fuckers were in tow, nothing popped up out of the ordinary.

Then she grabs my arm really hard & whispered:

They were about ½ a block in front of us just standing there & looking at her.

So I do the prudent thing to do, which was cross the street. I make sure I lock eyes with the big one & I keep in mind once I get the lady to her car, that I'd give them an ear full about being a couple little shits for scaring a lone woman in a metropolitan area.

I didn't get scared or anything but did notice something strange, they didn't break eye contact with me.

Mind you, I don't look like the kind of guy you want to fuck with. Honestly, it's an unconscious front since I'm a bit shy. My look reminds people of either a Skin Head or Club Bouncer. The Black Tanker Boots & Van Dike mixed with the above don't make me look like a people person either. People break eye contact with me constantly, these two kids didn't. That was a red flag for me.

I finally got this woman to her car. She said thanks, I made sure to tell her where the local police station is at. The Seattle PD West Precinct was only about 5 blocks from where we were at.