He Told Me To Never Agree To Help Them 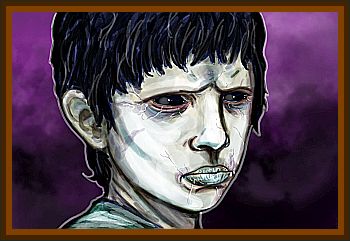 It was a cold October evening, not too far off from Halloween. I remember sitting in my room, playing the original suikoden.

The evening was slowly creeping by so I decided to go to the corner store. It was only 3 blocks, shouldn’t be much trouble. Right?

During my walk I see the normal. The occasional person putting up Halloween decorations and kids playing in their yards, but this story is about something far more sinister.

I remember seeing two teens about age 14, knocking on a door asking to use the phone, which of course I thought was weird because most teens these days have phones. As I kept walking, they stopped and stared at me for a short moment. I felt the blood in veins chill.

I felt so creeped out I hurried to the next block. The next block seemed fine, until I looked behind me and saw the two teens were following me. I took off sprinting to the store at this point.

I saw the sign for the store, and relief washed over me. I opened the door, and I told the cashier about what happened on the way here. He looked at me slightly creeped out, and told me a story about this happening to him in his hometown and how they found him the day he left, and asked for his help, in an emotionless voice, and he told me to never agree to help.

He told me another story, but at that point I was no longer paying attention because they were standing at the door asking to be let in. The cashier freaked out, and locked the door.

The teens never seem to waver or leave. They wouldn’t step away from the door. It had been an hour. The cashier and I were ready to fight our way out, but instead he took me out the back. The one kid came around the back just as the door shut behind us.

Can you help me is all he could say. He was closing in on us, and his eyes. They were black as a starless night. They were peering right into my soul. I couldn’t help but gaze into his eyes. The terror, I can’t remember too much of what happened next, but I do recall the sounds of struggle.

When I came too, the cashier was struggling with both teens. He was calling out to me for help. I ran towards them, grabbed him by his collar and pulled him between the two, and knocking them over in the process. I didn’t look back until I was near my house, the cashier was gone but the teens were still following behind. I ran into my house, closed all the blinds, and turned the music up.

I got lucky that day, but I’m not sure how long I can keep out of there grasp. I tried to find and thank the cashier for saving my life that day, but he didn’t show up to work after that. I asked his boss, and he told me he called over the phone and quit.

He said he was moving.

To this very day I sometimes feel the fear of those eyes watching me as I drive to work. I sometimes will look out my window and swear I see them watching my house from a couple blocks away. Waiting for their next chance.