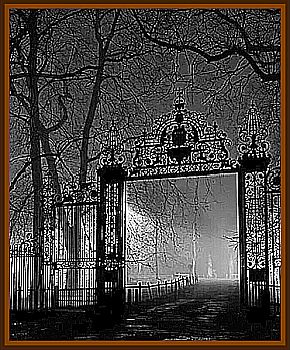 The children looked out of place in the night. Craig walked down the street toward his flat in Norwich, England, when two figures approached him.

At the time Craig, a Missourian, was studying abroad at the University of East Anglia in Norwich.

I'd been at a friend's house having a few drinks until the late hours, my friend asked me if I was all right to walk back to my flat, and if I wanted I could crash on his couch. I told him I would be all right, I just wanted to get home and go to bed. It was after 1:00 a.m.

Between hiss flat and his friend's flat was a cemetery, that's where he saw the children.

My friend lives up the street from a very old cemetery on Dereham Road, I walk past this cemetery every time I go to his flat.

Craig made it a few blocks when he saw two figures approach him.

Then the boy asked: could you please take us there?"

The age of the children and the late night struck him as strange.

I figured it was odd that young kids were hanging out in graveyards at this time of night. But kids are into whatever so I agreed to take them there. They asked me very politely and the cemetery was on my way home anyway.

As he escorted the boys toward the cemetery, he looked at them closer. The oldest boy's hair was jet black, his skin was porcelain white and veiny. Then he saw the eyes.

They both had eyes that were as dark as coal, no sign of white, The eyes were the most distinct features, it was like they had no souls or nothing inside of them.

Craig asked the pair where they lived. They named a nearby street.

He that was strange because this cemetery is huge and almost everyone in town knows where it is,

When they reached the cemetery gates the older one asked him to come in with them.

He told them no, He was going home. The older of the pair asked him again to go in with them. He still told him no.

The younger of the 2, appeared nervous.

He had this look of anxiety about him, then the older one stopped asking Craig. He started to make a demand for Craig to go into the graveyard with them.

Then the older kid's demeanor changed.

The frustration on this kid's face was trying to be hidden behind one of the most evil grins ever seen.

His heart was pounding in his throat at this time, as the older one said: We wouldn't harm you, with that grin on his face.

It was a hypnotic grin.

Oddly enough, Craig was becoming more drawn to him and was thinking that he should go in with them. Then the silent younger kid said something that scared the hell out of him.

The younger one said: We shouldn't be doing this.

Immediately after he spoke Craig snapped out of his trance. His flight-or-fight instinct kicked in and he ran as fast as possible. He looked back to see if they were running after him, but they had vanished. Craig ran all the way home.

About a week later, Craig wandered into a magic shop whose owner was Wiccan.

Craig bought some incense and then got into a conversation about being an American, traveling, and then about haunted places in town.

He told her his story of the 2 kids and the cemetery. She replied that he wasn't imagining anything.

Craig asked her what they were.

She answered that no one knows. The people who found that out aren't here to tell about it. She said they could have been anything from demons to fairies.

Craig asked her why anyone would want him to go willingly with them to the cemetery.

She said that they could just want something from you or they could have taken them to their realm.

She also told me that I did the right thing by running away, and that I'm never going to find out what they were so I'm better off just going on with my life and not thinking too much about it. I tell other people about it and they either get creeped out or they have a good laugh at my expense."