He Will Die Soon 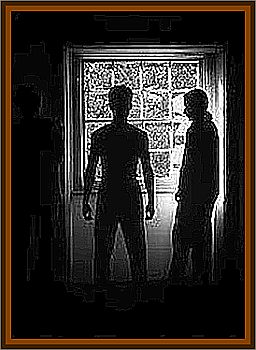 One morning during breakfast there was a knock on the door. I opened it to find two boys, around 10or12, standing on my porch.

The taller boy had knocked, the smaller had been straddling a bike. I found this odd that he was on my porch on his bike. He would have had to carry it up my front steps, and instead of standing beside it, was sitting on it. Still, kids are kids, right?

At first they kept their heads down, and I asked if I could help them. They said they just needed to come in for a minute and it wouldn't take long. I asked if they were from the neighborhood, and they didn't answer. It was about this time that I realized something wasn't right.

I told them that I wasn't comfortable letting them into our house. There had been a number of home invasions and both my wife, and I, were wary of strangers.

They didn't say anything else. However the strange stuff started happening after they left.

I kept having recurring nightmares about their visit which would wake me in the middle of the night. I completely lost my appetite and I didn't want to leave my house.

Then they visited me again. It was morning during breakfast and my wife heard someone knock on the door. She went to answer it and saw the boys I had mentioned standing there waiting for her.

They stood and stared at her, and she stared back.

He will die, Soon, The taller one of them said.

My wife told them to get the Hell off our property and they just smiled at her.

Let us in to use the phone, The taller one demanded.

My wife said that she had never been so scared in her life. She just stepped back, closed the door and turned around. She came back into the kitchen and asked me if I had heard them.

I told her I hadn't. I had thought she was in the bedroom.

I kept feeling awful and about a week after that incident I went to see my doctor. He then sent me to another doctor for tests. He found that I had a tumor. They operated, and I survived, but I believe it was caused by those damn kids. I think that they are demonic.

They are also telepathic as during my encounter I had thought:

The taller boy looked at me with those black eyes and said directly into my head:

You know he isn't real don't you?

Stay away from these damn kids, seriously. Never let them in, or look into their eyes.