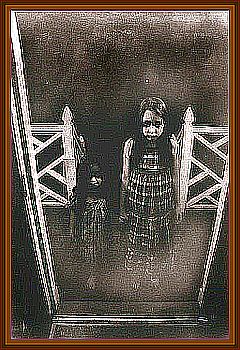 In January 2014 I had fell asleep in my recliner which was positioned in the corner of the front/living room. The front windows were directly over my left shoulder running towards the front door. It was about 2:45 a.m. when I heard a knock on the door. I peeked out from the drapes, still in my chair and could see the shadow of a short person from the flood light by my front door.

I immediately was scared to death. I'm not normally an easy person to scare and am not sure if the immediate fear exasperated due to usually not worrying that someone was at my door but when I say scared, I was petrified.

I stayed in my chair and looked to my TV as it turned off by itself. Then I heard the knocking immediately at the window closest to me.

I looked and there was a short person, didnt look like a child as the face seemed strange and the eyes were large and jet black. It beconed me toward the door and I couldn't move.

As I saw this as I immediately concluded was some sort of demon walked toward the door I bursted up to make sure my door was locked. I bowed my head, said a quick prayer and looked but didnt see anything. I ran to my kids room to check on them then my bedroom to check on my wife.

Everyone was ok so I basically stayed on guard all night.

A week later I thought I had a dream of the same thing.. When I woke in my chair there was hand prints on my window from the outside, It hasn't happened since. I live south west of Chicago.