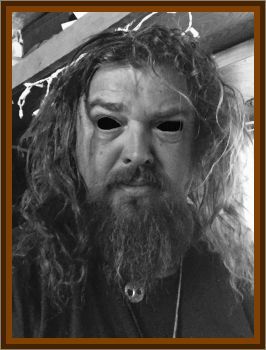 19 year old Dallas Adams pumped gas into his car at a convenience store in Lucas, Texas. A man & his son stood at the pump opposite Adams, a woman at her car was behind him. When the tank was filled, Adams placed the nozzle back onto the pump, went inside the store. Things were different when he came out. There was no line in the gas station, I bought cigarettes and walked out but when I came out my car was the only one there. I had only been in the gas station for maybe 2½ minutes. As soon as I noticed everyone was gone I felt scared but couldn't figure out why. Adam said.

Then he saw the man standing by his car. As Adams walked by him, he noticed a smell, like the man hadn't showered in weeks. He looked like an average guy but when I looked at him I felt scared like my life was about to end, said Adam. I went to my car and looked at him, he was staring at me. The man came closer to Adams as he stood at the driver's side door, walking in long steps.

I need a ride, the man said, the force in his voice striking Adams like something physical.

It scared me to death, Adams said.

The man again replied: Give me a ride.

Then Dallas saw what frightened him. The strangers eyes were completely black. No whites, no nothing, just black, said Adam.

When I was talking to this thing I could smell its breath, which was horrible.

Adams worked up the courage to ask where the Black Eyed Man wanted to go.

The man simply replied, Just give me a ride.

I said, I'm sorry, I can't, then he took a few steps toward me, Adams said. His walk was kinda odd, but stopped as this conversation was happening.

But what terrified Adams was the man's eyes.

I couldn't take my eyes off of his, said Adam. It was like they were sucking me in.

As Adams stood, watching the strange man with the black eyes approach him, something broke whatever held Adams' gaze. Adams hopped into his car and sped away. What did Dallas see?

This is really troubling me cause I've had dreams about this man every night since the day it happened, Adams said. Black-Eyed People have been in the popular culture since two approached a journalist as he sat in his car in 1998. The encounters are usually the same. Black-Eyed People are usually children to young adults who use language and assertiveness that would seem to be beyond their means. But the most common thread is their eyes, BLACK, without iris or whites, and dead like a Hollywood vampire's.