Are They Even Alive? 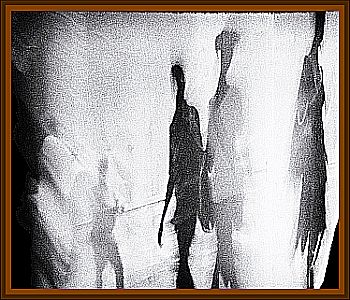 Experiencer Ezekiel Finch is convinced this boy, and people like him, aren’t human. At least not any more.

I’ve run into these things more than once. Different ones in different states, said Finch. With a fair degree of certainty I can tell you what these things are, vampires.

Finch has had two close encounters with Black Eyed Beings, one in Albuquerque, NM, the other in the medium sized city on the East Coast where he lives, and chose not to identify.

Two of my most extensive encounters were within very, very close quarters in the low 30s, Finch said. I watched them as closely as I could.

Standing in the cold night amongst a small crowd of people, Finch suddenly felt uneasy. Something was wrong with two people there. First it was their black eyes flatly staring over unnatural smiles, then it was something subtler.

People breathe all the time. They inhale before speaking, and that’s it, Finch continued. When they did speak you didn’t see anything. Not a damn thing. Everyone else had visible breath, they didn’t.

Finch stood watching the pair chatting with the people around them. Steam rose from everyone else’s mouths. Not a thing from them, Ezekiel said. He studied them closely for the next ten minutes and saw why their breath wasn’t visible in the cold night, they weren’t breathing. No movement from the torso at all. Still as a corpse.

Black Eyed People have become a staple in conversations of the strange and unknown, and almost every reported encounter is eerily similar. Children, as young as six years old, to adults, approach people alone or with a partner and beg for help, please let us in, give us a ride, follow us here. Permission to enter is also a legendary trait of a vampire.

They ask permission for a simple reason, if someone invites you into their home they are less likely to call the cops on you, Finch said. You invite them in, you feel sorry for them, drink with them, buy drugs from them, have sex with them, whatever angle they use to get you to open the door, they can catch you off guard, then Wham, you find out why they are actually there.

Finch’s second encounter wasn’t from across a parking lot of people, it was a little more personal.

I had the displeasure of conversing with one as she tried to convince me it was fine for her to be invited into my home, said Finch. It was 30°, snow on the ground, and she was wearing a tiny mini skirt and a spaghetti strapped top just standing there.

As he stood inside his doorway, listening to this scantily clad girl beg him to let her into his home, he thought she might be under the influence of drugs, but quickly saw something else. There was no reaction to the cold, no visible breath, no inhaling, she could care less about the temperature, or breathing.

Finch said he doesn’t believe Black Eyed Beings are anything short of monsters.