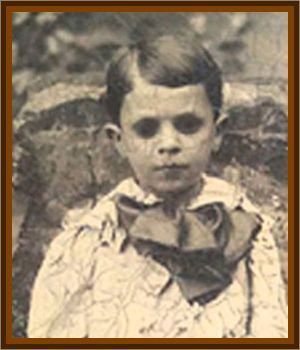 One of the earliest known accounts of black eyed children dates back to 1950 in Vriginia and concerns a 16 year old boy, known only as Harold.

Harold was walking home one afternoon when he came across another boy leaning against a fence, as if waiting for someone. Harold attempted to speak to him but received no response. He was about to walk off and go on with his journey, when the strange boy suddenly stated to Harold: I want to go to your house. You're going to walk me up to your house.

It was then that Harold noticed the blackness of the boy's eyes. There was no white, just solid black.

Then something even stranger and more chilling happened - Harold had begun to contemplate turning and running home as fast as he could when the boy blurted out; Now, don't you run away from me. You're going to walk me up to your house.

Harold turned and ran anyway, faster than his legs had ever carried him before.

He later recalled to his parents that as he did so, he heard a scream behind him, a scream that sounded very similar to that of a bobcat.

Interestingly, his parents believed their son's account, so much so that his father was said to have grabbed his gun and immediately gone out looking for the menacing boy who had demanded his son take him to their family home. His mother apparently thought her son had an encounter with the Devil himself and stated that she would take him to see the local priest.