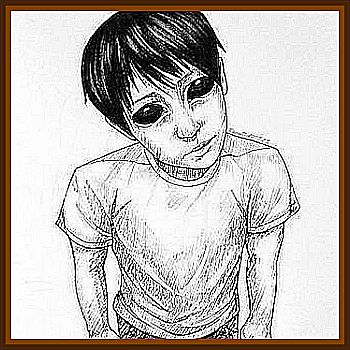 Kerrie Kisner hadn't intended to stop at the Triangle Town Center mall on her way home from Wake Tech Community College near Raleigh, North Carolina, but she did.

She wished she hadn't.

There were very few people there that day and found it strangely eerie how quiet it was, Kisner, 20, said. While walking back to my car I rounded a corner and saw an older lady and a young boy. He immediately caught my attention because he was so odd looking, I had never seen anyone like him.

The boy, about twelve years old, seemed average at first, but as Kisner watched him talk with the woman, he seemed anything but average. The boy's black hair contrasted sharply with his pale skin, dark patches hung under his eyes.

It looked like he hadn't slept in weeks, he had a very thin face, Kisner said.

As Kisner walked closer to the pair, she heard their conversation. In a quiet, but strong voice, the boy asked the woman for help.

He stood very rigid with his hands by his sides looking at the ground as she fished around in her purse for something to give to him, Kisner said. As I got closer I noticed he seemed to get more and more uncomfortable.

The boy began to shift his body when Kisner passed them on her way to her car, then he lifted his head and made eye contact with her.

The look he gave me has haunted me. The feeling I got from him was as though he wasn't all there, almost ghostly.

Eyes locked on Kisner's, the boy turned slowly and not waiting for the older woman to give him what she dug for in her purse for, simply walked away. Kisner doesn't know who, or what the boy was, but this memory will stick with her forever. Ever since then the look he gave me has haunted me, she said.

Almost like he knew what I had been thinking.

There were very few people there that day and found it strangely eerie how quiet it was.