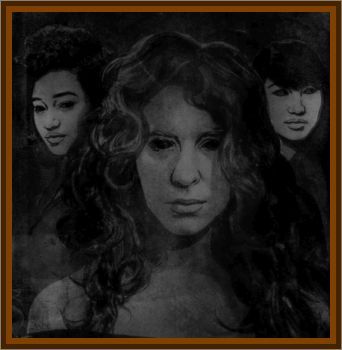 I was stunned to read about the incidents with the creepy black eyed kid's because I had a similar incident happen to me, while visiting Portland ( Oregon ) in August of 2000.

My girlfriend and I were staying at the hostel on Glisan Ave in NW Portland. It's a very nice place in a hip and fun, if a little yuppyish section of town. It was a Friday night, actually early Saturday morning. April, my girlfriend, and I were up socializing with another couple from England, sharing some laughs and playing some songs...I had my guitar with me. Well, at about 2:30 AM, we suddenly realized that there was no more beer left and none of us really felt like calling it a night just yet. April reminded me that I had bought a couple of bottles of Pinot Noir from a little place called the City Market earlier in the day, but they were still in the trunk of her car. So she tossed me the keys and I ventured out to make the hike to where the car was parked.

There is a sort of a good luck finding a spot to park policy at the hostel, so we ended up parking in a spot off a side street about four blocks from the hostel. It's not really a bad area, nightlife was still winding down not too far away from the hostel, and I could hear the random noises of revelry off in the distance. But as I walked to the car, I found myself feeling very alone.

As I turned down the street to where the car was parked, a misty rain filled the air, not really drops, but a kind of misty directionless rain. The streetlights lit my path and reflected their dim glow in the wet pavement. As I reached the car and slid my keys into the trunk latch, I heard this voice call out. Hey mister. Thinking I was alone, and not having seen anyone as I was walking down the street, I was very startled, and I whirled around to be greeted by the face of an adolescent who gazed at me intently from just a few feet away.

I was really unnerved and by reflex I jumped back then grabbed my chest and said something like, Jesus man, you just scared the shit out of me. The kid just kept looking at me undaunted. He appeared to be between the age of 11-14. And he wore old jeans and a hooded sweatshirt. His hair was black and his skin was tan. He had a Mediterranean look about him. It was then that I noticed that his eyes were all black. My first thought was that he was on LSD because I know that that can dilate your pupils and give that type of appearance. But this kid didn't seem to be on a drug, he seemed very calm and confident. It was kind of unnerving to have a kid act like that.

He said, without looking away, I'm lost and scared, do you think you could give me a ride to my mom's house? But this kid didn't look scared at all. Masked behind those youthful features, was the expression of a wolf leering at me. I'm a fit 28-year-old man, and what I felt was real fear. He kept moving closer and closer to me.

Quickly I broke eye contact…It was difficult though because those eyes were compelling. Deep pools of black, they looked ageless in contract to that young face. They stared at me reflecting the streetlights. It was like gazing up at a star sprent sky on a clear night.

I backed off up onto the curb and stammered, Uh no..Really I can't, I have to go..Sorry. I kept looking at the ground because I had the feeling that if I kept looking at his black eyes I would become trapped like a fly in a spider's web.

I heard him say..Oh that's OK, here come my friends. I quickly looked up past him down the road and I saw another young boy and a girl about a block further down in the middle of the street. I didn't have my glasses on and I have trouble seeing clearly off that far. But I'll be damned if it didn't look like they were floating towards us a couple of inches off the ground.

I turned around to run and I heard a guttural growling behind me. I ran faster than I ever ran in my life straight towards the hostel. I kept feeling like they were right there, behind me...clawing at the back of my neck….I will never forget that feeling as long as I live. It was the closest I ever experienced to true terror.

When the hostel was in sight I finally looked back and I found myself alone. I kept running though and didn't stop until I was again with my friends. They were all surprised to see me panting bending over. And asked, What happened?, Where's the wine?. I collapsed on the floor and didn't speak until I regained my composure. Suddenly I felt ashamed that I ran from a group of kids. I never told them what happened; I told them that some thugs tried to start a fight…

Obviously, at that point I no longer felt like socializing and I told my friends that I wanted to retire for the evening. So April and I went to our room. Despite the warmth I insisted on shutting the window and closing the curtains. I didn't sleep a wink.

I never told anyone what really happened until now. When I read that story my blood ran cold and all my hair stood on end. I'm still moving there this fall.