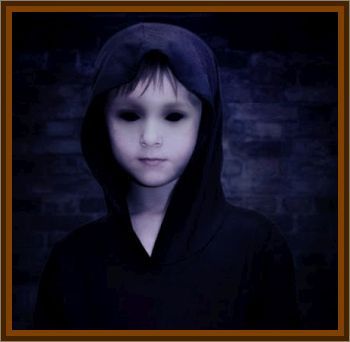 The mere idea of them terrifies me. It didn't used to. In fact I didn't understand what the big deal was. I don't know why, I mean I read the online stories and articles about BEK's just like everyone else but I just didn't have that deep rooted reaction like so many other people did when reading about them.

So I embarked on a quest. I'd show people just how unscary these things were, whatever they were. Who knew if Black Eyed Kids was even a real thing, I'm the kind of person who needs to see it for myself.

I began doing a lot of research online. I looked at the paranormal sites, I watched scary videos on YouTube about them, and from everything I gathered they found you, you didn't find them.

And it seemed like it was pretty much just by chance if they did find you. So what was I to do? I came up with a plan.

I began putting up an anonymous ad on craigslist.

It read: Black Eyed Kids. I am not afraid of you. I want to meet you. 9:00 p.m, Wednesday. The park bench on the corner of 3rd and Washington. Show me why I'm wrong and I should be afraid.

The bench was only like a block from my apartment so every Wednesday I would walk down there and see if anyone or anything came by. I usually wouldn't sit there, I'd stand back and watch. I'm not stupid. I may not be afraid of Black Eyed Kids, but I know the internet can attract some nuts. And it did. Occasionally. Nothing exciting enough to write about though, a couple pervs and some teenage kids joking around.

So this went on for 6 months and then I stopped posting the add.

The week I stopped I got a knock on my door. I was sitting on my couch and it was a little after 9:00 p.m. I don't know how to explain it but the second I heard that knock my skin went ice cold. I didn't need to get up. I knew who it was, and much to my surprise I was terrified already. I was wrong about not being afraid of Black Eyed Kids. The fear is on a different level, an instinctual, primal level.

But still, I managed to get up and open the door. And yep, there was a kid, about 9 years old. olive skin, dark hair, solid black eyes, staring up at me.

I was speechless. After what seemed like an eternity I responded with a: No, and I began closing the door.

We missed you at the park tonight, the boy said.

I stopped closing the door. I looked at him, my mind racing. They've been watching me. The boy smiled up at me. It took everything I had to make my arm move again, pushing the door closed and locking it.

As soon as I shut the door I gasped for air. I hadn't been breathing. I sat back against my wall, facing the closed door.

Knock-knock-knock. He was still there. I waited. Nothing.

It took me at least an hour to move from that spot, staring at the door. I didn't sleep that night or the next night. Eventually I collapsed with exhaustion at my desk at work, only to be awakened minutes later by a nightmare memory of that boy.

It's been six months. I can't explain the fear that washes over your body when you see the eyes on these kids. And the state of your mind, the way your body wants to listen to what they're telling you, what they're asking. I thought if I told you my story it would help me get over what happened and warn others. I'm positive these kids are evil and the people they meet who can't resist whatever power they wield. I don't think we will ever hear from those people.

I now avoid that corner park bench with everything I have and I don't tell anyone why. People think I'm crazy sometimes, walking 3 blocks out of the way just to make sure I don't go near it. But you'd be the same way if you went through what I did. Black Eyed Kids are nothing to mess with.