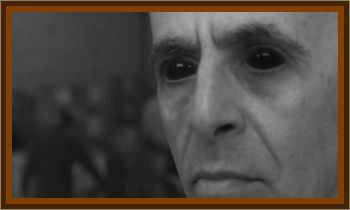 This story is about a black eyed salesman that my family and I encountered a few years ago. It was an ordinary day. My mom, father, one of my sisters, and I were in the living room watching TV. There was a knock on the door, which is strange because we had a fully functioning doorbell. I walked to the door and looked in the peep hole and saw a black man, probably in his 50s, with a black suit on and a long black trench coat over that. He had an all-black Dobb hat on and a black duffel or gym bag with him.

He creeped me out because I kept asking who it was, but he never responded. I could just see him trying to look into the peep hole from outside. So I told my father to come to the door. My father slightly opened the door and I immediately felt fear for some reason. The man was not saying or doing anything in particular to make me feel this way, but it's just the feeling I got.

My father asked what he wanted and he said he had some perfumes for sale and would like to know if we wanted to purchase some. My father was the type of man that would donate or at least hear what you have to say because he knows how hard it is to do that kind of work. My father opened the door wider, signaling for the guy to come in, but he just kept peeking around the corner as if he was checking it out before he entered. My father looked at him and said: Aren't you going to show us what you've got?

The guy kept saying, still looking around, Only if you invite me in.

I opened the door, my father said.

I know, but you have to invite me in, the man replied.

As the guy entered, he kept staring at me, and I noticed that he had no whites in his eyes. They were totally black! No life in them at all. I immediately closed my eyes and started saying the Lord's Prayer. I kept my eyes closed the entire time he was there.

My father never bought anything from him and he never took anything out of his bag. He just kept telling my father that if he bought from him he would be eternally grateful for his purchase. My father asked him to leave because he never showed him what he would be purchasing.

The creepy part is when I opened my eyes as he was leaving, he was still staring at me, and my mom said he stared at me the entire time he talked.

No one knew I was praying, but I felt that this guy or thing, could sense it. It was as if he was bothered by it.

After he left, we started smelling the scent of fresh roses and flowers. The guy had never even taken anything out of his bag, so that was strange. We immediately looked out the window to see if he was there, he should have just been leaving our porch at this time. But no one was there. I went outside to see if maybe he went to a neighbor's house, but he was nowhere to be found.

Creepier still, he came back about a month or two later when I was home alone. He had on the same outfit, all black eyes, and same bag. This time I never opened the door or let him in. I told him through the door, of course, that we weren't interested in what he was selling. I peeked through the peep hole only to find him peeking back, smiling sinisterly.

And once again he just disappeared. I'm happy to say that I have never seen him again.