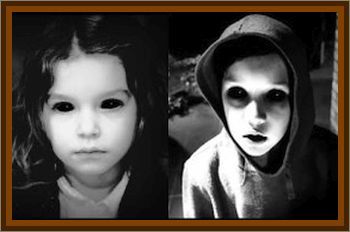 It almost felt like a dream. I woke up to my dog, Lucy, barking. She was upright on the bed where my husband and I were sleeping with our 22 month old daughter, staring at our door like an unknown stranger was out there rummaging around. I thought she was just freaking out over a house noise. We'd only had her for 3 months and she was still a puppy. It could have been anything- our roommate, a creak from the house settling, the awnings moving outside in the breeze, I wasn't too concerned initially.

I decided the best bet would be to open the door and show her nothing was there. It sounds a bit silly, but it's what we do with our daughter when she gets scared, and I figured it should work with a puppy, too. I opened the door and she raced to the front door. She stood there, snarling at the door. It was an angry, violent growl, one I had never heard her make before. I looked groggily at her and opened the baby gate blocking the doorway, planning to open the door and show her everything was OK.

The second my hand reached for the deadbolt, Lucy went wild. She started barking and jumped toward me, and when I touched the metal, she suddenly changed her temper. She whimpered, almost like she was afraid and backing down. As her mannerism changed, so did mine. I wasn't calm anymore. My heart was racing and sinking at the same time. I had been flooded with a mixture of fear and dread. I looked through the peephole. I can't explain why I looked, but I did. Outside were two kids.

One was just a smidgen shorter than me, and didn't look much younger. I'm 21, and she looked to be 16 or 17. She was slender and pale. Her hair was a light shade of honey blonde, and she wore it long, about mid-back, with long, thin, blunt bangs in the front that covered most of her eyes. She wore jeans, a light-wash that's popular right now, and a thin looking olive colored pullover style hoodie. She held the hand of a small girl, who looked to be around 3 or 4, in the same style jeans and a button-down ivory cardigan. The smaller one looked at the floor shyly, but had the same shade of hair, tied back in a ponytail. She held a stuffed toy under her free arm, and it was identical to one my daughter has, as was their style of dress. Had it not been for the feeling of overwhelming dread and fear, I probably would have asked these children in and given them some tea or hot chocolate to get them out of the bitter cold. Something about them seemed off. At this point, I hadn't made any noise. I hadn't shushed the dog or grumbled, nothing. I hadn't turned on any lights, these kids had no indicators I was at the door. The older one spoke.

She had a voice that was mature, confidant, strong, and accentless. She held her head tilted downward, and I couldn't see her eyes. She said “We have to use your phone.” I stood frozen in fear. How did she know I was there? She raised her head to face me directly, and that was when I saw her eyes. There was a reason I couldn't see them through her bangs before, they were black, or midnight blue, or a dark, dark purple, they were otherworldly. She said. “Our mother is worried.”

As someone who has always been interested in creepy stories, I knew what she was the second she looked at me through the door. I have never been one to believe in these things, as a staunch Atheist and skeptic when it comes to the paranormal, I had written off many a ghost story from friends and family members eager to tell their tale. I didn't believe it. Still, I couldn't rationalize my way out of this. I was standing with nothing but a thin wooden door between me and a Black Eyed Kid. There was no questioning what was right in front of me.

I did not answer her. Slowly and silently, I backed away from the door, Lucy still cowering at my ankles. She kept talking. “Just let us in to use your phone.” I took another step back, and with that step, the tone changed. At first, she seemed polite. When I took that second step back, she became commanding, almost hostile. We're not going to hurt you. If we wanted to do that, we would have broken in. I'll ask again. May we come in and use your phone?” Lucy snarled at the door, and I inched backward, though something inside me seemed to be slowly pulling me back toward the door. It wasn't a physical pulling so much as a subconcious need to go back and let them in.

I got to my room, covered up the window, locked the door, and sat there in the dim light of the nightlight. I heard her call me back to the door once more, and then quiet. I didn't go back to sleep that night, and I haven't slept right since. I know from reading about them that BEK's can't just come in without permission. I know they haven't hurt anyone, but I still fear I'll be the exception. When I told my husband, he said it was just a dream. He keeps telling me to forget it, but this lingering feeling of sadness, this dread when the house is silent at night, this fear of a knock at the door… this tells me otherwise.