Spooked By A Young Girl 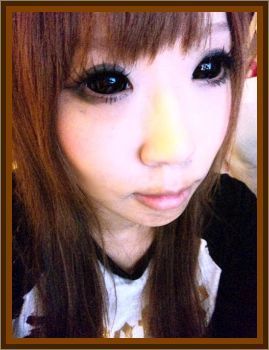 I have a pretty odd sleep schedule sometimes, and I had been sick yesterday, so I went to bed fairly early and ended up waking around four in the morning. I was hungry but I haven't done any grocery shopping lately, so I decided to wait for Starbucks to open at 5:30 a.m. I played with my cat, got dressed and left at about quarter to six.

It was still dark out, and I checked the weather just before I left the house, it was chilly, 50°F, and there was a fog warning with low visibility. To my surprise, when I walked out the front door, I was met with a breathtakingly clear predawn sky. I live near the downtown of a mid sized city, but I could see stars that I hadn't noticed since moving out of the suburbs. I really like observational astronomy, so I walked with my head up, smoking a cigarette and spotting planets.

I passed by a gap in some buildings that allowed me to see closer to the horizon, and I had just noticed the Morning Star, Venus, when I almost ran straight into a girl standing in front of me.

She was taller than me, about 5'4", and very slender. I would say she was between 12 and 14 years old. She was wearing a thin dark hoodie and skinny jeans. She was lit from behind by the window of a convenience store, so I couldn't see her face too well, but I could see that she had medium brown skin and a whole lot of curly black hair.

As I stopped short a couple of inches in front of her, and quickly apologized, she didn't move or look at me, she appeared to be gazing off into the distance across the street.

If she had been older, I would have written it off as weird and continued on my way, but I get worried about kids very easily. It wasn't even 6:00 a.m., and this young girl was out alone, and not really dressed for the weather, either. I started to feel nervous, the girl looked fine, clean and whatnot, but her demeanor was so odd I was beginning to think she might have been attacked or run away from a party gone wrong. I opened my mouth to ask if she was okay, but before I could say anything, she spoke, still not looking at me.

I think I'm lost. She paused for a few seconds before turning her head and looking into my eyes. Can I come home with you and use your bathroom? As soon as she looked at me I felt the bottom drop out of my stomach. I feel so stupid saying this, but there was something wrong with her eyes. She was still partially in shadow, so I tried to rationalize that it was a trick of the light, but as I looked back at her I couldn't deny that there was nothing there. They were black, but it was worse than that. They looked like pits, as though her eyelids opened into a black void inside her skull.

Still, she was a child, and I still hadn't had my coffee, and stuff like this doesn't really happen, right? It's just crazy people and tale spinners on the Internet. I swallowed my fear and tried to smile.

I'm on my way to Starbucks. They have a bathroom there, so why don't you follow me?

It was as though she hadn't heard me. Her expression didn't change, she just kept staring at me with those empty eyes.

I need to use the bathroom, she repeated. I'm lost and I don't have any money. Please help me.

Nothing about her face looked scared or pleading. She was completely blank.

I can buy you a drink, I offered.

Come on, why don't we go somewhere warm and I can call your parents?

At this point I was shaking with fear. I felt ridiculous, and frustrated, and I just wanted to run home and cry, but no way was I letting her see where I lived.

She looked at me for another beat, then suddenly, as though she'd put on a mask, her face lit up with an angelic, charming smile. Her eyes, though, didn't change.

See you later!, she said lightheartedly, and skipped off in the direction I'd come from.

See you later? Jesus, I hope not.

I turned and watched her go, but before she was even a block away, she looked back at me, and I knew I had to run. I booked it to Starbucks, knowing I looked insane but not giving a damn.

The scariest part of all? My perfectly valid Pumpkin Spice Latte coupon didn't work. Just kidding, the scariest part was the demonic little girl who promised she'd see me later. Jesus Christ guys, it's 2½ hours later and I'm shaking like a leaf just writing about this.