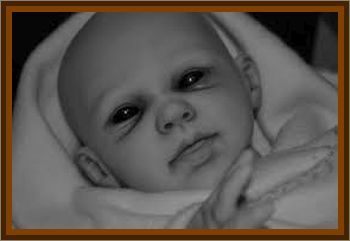 I was employed at an appliance and furniture rental & sales business in Great Bend, Kansas.

One morning a coworker and myself opened the store. When we arrived we noticed that the backdoor was open and when we entered the backroom all the lights in the store had been turned on. It didn't look like a break in because the security latch was intact. The security system had been disabled, there was no power indicator on the code box. We immediately called the police and the store manager to report the situation. We were told not to open the store and to remain in the back office until someone arrived.

A few minutes later, after hanging up the phone with the store manager, a police officer was knocking on the back door. I let him in and told him what we had found when we arrived. The officer started to walk through the back room and into the showroom when we started to hear a baby cry. I thought that a customer may have somehow entered the store and that they had a baby with them. My coworker and I followed the officer in the direction of the crying, well, I didn't believe what I saw. There were 2 babies lying on a twin size bed display. The officer told us to stay there while he checked the rest of the store. He had also radioed for another officer to come to the location.

I looked down at the babies who were both tightly wrapped in dark green cloth. Both babies were quiet, very still and looking at me and my coworker. I was taken aback by their odd eyes, both babies had large pupils that were black. There were no irises and neither of the babies blinked. The first officer was soon back with us, he commented on the babies eyes as well. In fact, he was totally freaked out, so much so that he looked scared.

The store manager soon arrived as well as a senior officer. We all stood around the bed looking at these strange babies who laid there quietly watching us. The store manager pulled my coworker and I to the side and told us to go ahead and leave. He was not opening the store until he found out what was going on. We quickly headed toward the back door and left.

I wasn't scheduled to work until a couple days later but I had talked to a few other coworkers, who said that the atmosphere in the store was very strange. They had been receiving weird telephone calls and that the security system alarm would trip on several times during the day.

I got to work a little early for my next scheduled shift. When I arrived the store manager was sitting in the office and I asked him what had happened after we had left. He said that 2 young women, who said they were from the municipal court, eventually showed up and took the babies. The senior police officer told him later that he had no idea who the women were but that he was told by his superior not to impede. He thought they were probably from McConnell AFB in Wichita. He also said that the babies were very quiet and seemed relaxed the entire period that they were there.

I stopped working there not long after. Things were just never the same and it got tougher each day, especially when odd looking people would come into the store and just walk around. I didn't feel comfortable being there.