At The Front Door 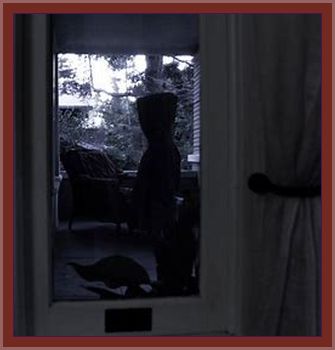 I headed out to mow my lawn. In the front of the ditch of my road I have tons of bushes and flowers neatly set up. To my surprise, someone had come by and stepped all over my roses. I was deeply upset.

The next day, I saw two kids walking down my road. Keep in mind my road has seven houses, so we all know each other. These kids looked to be around 12 or 13 years old.

I've never seen these kids before, maybe they were visiting someone was the only thing I could think of. I wanted to go outside and ask them if they messed with my roses, but I figured they're just kids and I'd let it slide this time. The kids stopped walking and just stood on the road right across from my house. That's a good 80' to 90' away. They just stood there. I was looking out the window and they were just standing right there. I went to my room to go get my shoes and when I came out they were gone.

Now this is where everything went to hell right here. It was 8:00 p.m. and starting to get dark out. My power went off and on a few times. I'm not sure if this had to do with what happened, but it did freak me out. It finally came back on.

At around 8:20 p.m., I heard knocking at my front door. Around here, people all tend to know each other, so we usually always open the door to see who it is. I turned on my porch light and and looked through the little hole on my door, but it was just pitch black, even though the light was on. I didn't know why, but I was extremely terrified. I started to put my hand on the handle and I asked, Who's there?

Some kid answered, Sorry to bother you, mister, but we are lost and need to borrow your phone.

I have a spare cell phone you can borrow for a few minutes, I told them. Let me go get it and I'll come outside with you.

The kid just said: No. You let me in right now! And he started banging on my door. I'm not talking about just hitting it, but it was like some grown man was hitting it.

I said: Kid, you quit that right now. I got a shotgun, and if you try anything I will shoot.

The kid kept screaming: Let me in now! You're making a mistake!

I grabbed the shotgun just in case, and held it off to the side of my leg. I put my hand on the lock and unlocked the door. This is where I made my mistake. I opened the door expecting either both those kids or just one kid with a weapon or something. But these weren't little kids. Standing at my door were two people, and both looked 12 or 13. But their eyes were pitch black.

I felt terrified again. I felt like putting my shotgun down and letting them in. I'm not sure why I felt that way. As I had the door open for those 3 or 4 seconds, the taller kid started to walk forward to come in. I kicked my door shut as hard as I could and I locked it. At this point I heard them both crying and screaming in a strange distorted high pitched way, followed by some banging on my door again. I went to check my back door, just to make sure it was still locked. Thankfully, my back door was locked and by the time I headed to my front door, they just stopped.

I loaded my shotgun and opened the door expecting these things. But they were gone. I heard some footsteps and my neighbor was coming by. He heard some weird screams and came by to check on me. I stood there, probably looking like death, with a shotgun in my hand. I let him in and told him the entire event. He told me to call the cops, but I was positive they wouldn't believe me. I never called the cops.

He left and I spent the next two days without sleeping. I have no idea what those things were. I sometimes have nightmares about them. I'm not sure if anyone else has ever seen these things, but if you ever do, or you hear kids telling you to open the door, grab a weapon and stay in your house.