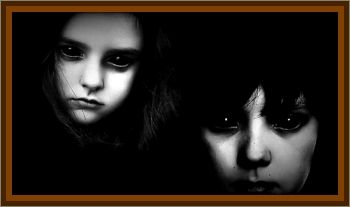 Yesterday I noticed my neighbor hadn't put out all his Halloween decorations/lights/etc. The past two years I've lived next to him he's gone all out for Halloween. I don't know him well, he's younger, single, but I know he likes kids. His brother and sister-in-law and their kids are always visiting him and he plays with his three young nieces and nephews out in the yard.

So anyway, I got home from work and was walking up my driveway and I saw him outside and said something like Hey Buddy, you better get your Halloween stuff up or that house up the street is going to beat you for best decorations. He kind of smiles sheepishly and says that he's actually going to keep his house dark this year and just put candy out. I asked if he was going out of town, but he said no, something happened last year that really scared him.

Now I was concerned for my own safety if some weirdos were coming around our neighborhood (which is a pretty safe neighborhood with tons of young families living here), so I asked him what happened. He said last year he had his brother's family over so they could trick-or-treat in the neighborhood since they live in an apartment complex that doesn't do much for Halloween. He had a bunch of kids come to the door like always. His family took off around 10:30 p.m. and there were only a few older trick-or-treaters, but by 11:30 p.m. they were pretty much done. So he was inside, watching TV and the doorbell rings.

He grabs the candy bowl and heads over, noticing that it's a little past midnight and that's pretty rude for trick-or-treaters to still be out, but then notices he hasn't turned off all his decoration lights yet, so his house is still a beacon. He swings the door open and is about to yell “BOO!” or something to freak them out, but stops dead when he sees the kids at the door.

He said one was probably around 13 or 14 and the other around 16 or 17 (both boys). They weren't dressed up, but he remembers the older one was wearing a flannel checkered shirt. He was immediately overcome with uneasiness, like opening the door was a huge mistake. They just stared at him and he noticed they had really big irises and dilated pupils. He couldn't even see the whites of their eyes, so he figured they were contact lenses. He was frozen there holding the candy bowl, like he couldn't slam the door in their face as much as he wanted to. So he nervously tried to smile at them hoping they would break character, and ask for candy or something. The younger one said they had gotten lost and needed to come in and use his phone. That was when he closed the door more than halfway on them and said No, sorry, and the older one said something like Can we just wait in your house until our parents come get us? But by then he was convinced that his life was in danger and these kids must be high on something or intending to rob him and he just kept mumbling No, sorry, goodnight, as he inched the door closed and locked it.

He was so scared at that point that they were going to try to break in through one of his windows or something, but he looked through the peephole and they had turned to leave.

He watched TV with the volume really low so he could hear any sounds at all and he said he stayed up till like 5:00 a.m. because he was too scared to go to bed and drop his guard. The whole time he's telling me this I'm thinking oh my god, this sounds so familiar, just like the Black-Eyed kids urban legends. Then I thought hey, maybe this dude is trying to scare me because after all, he does have the Halloween spirit, so I'm looking at him incredulously but trying not to seem too gullible. I'm like Man, that is really crazy, sounds like the Black-Eyed kids. He just looks at me blankly, The what?, is that a movie or something? and I said no, but told him to go look it up online.

Like an hour later I get a knock on my door (and admittedly, almost jump out of my skin thinking it's a demon child). It was my neighbor and his eyes were freaking huge. He swears to me up and down that he had never heard of the BEKs before and it's so similar to what happened to him. So we talked awhile longer and I told him that quite a few people probably know about that urban legend and it's possible it was just teenagers with black scleral contacts trying to freak people out on Halloween. But he said the fear he felt was so primal and came over him the second he opened the door for them.