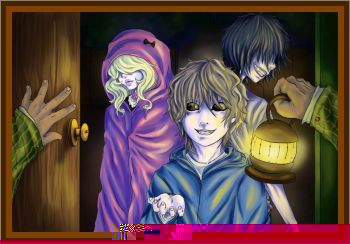 Let me preface this by saying I'm by no means a writer, just a "domestic engineer" living in north Texas. Also, I don't believe in the paranormal ghosts, demons, aliens, whatever. However, I did have an event happen to me this Halloween I have to admit has me scratching my head. I told my best friend about my incident and she's an avid reader of nosleep and she told me if I didn't post it, she would. So here I am. Anyway, hope you like.

So, it had been a slow trick-or-treat night in our neighborhood that evening, which is pretty odd in itself. We usually have kids from different areas "dropped off" in ours and have a constant parade at our door. That night I'd say we'd had no more than 8 or 10 groups of kids come by the entire night. It was about 9:30 p.m. and my husband and I were sitting in our family room watching some of those ghost shows based on (supposedly) actual events. Like I said, I don't believe in that stuff but I do like a good ghost story now and then and it was Halloween and all.

We hadn't had any activity at the door in over half an hour and it was getting late so we decided to turn the porch light of and let our dog Chloe out of her crate. Chloe is an American Bulldog and is very docile. We only put her in her crate because we were afraid she'd try and get out to "play" with all the kids and I didn't want to have to chase after her down the street. Also, we didn't want her to scare any of the kids because she would look a little intimidating to the younger kids.

So, I turned the outside light off let Chloe out and she followed me back to the couch and lay down at my feet. It was getting close to 10:00 p.m. when my husband decided he'd had enough fun for the night and was going to go upstairs, take a shower and get ready for bed. After all, it was Thursday and he still had to get up early the next day. My teenaged son was out with his friends at a local haunted house and wasn't expected back for another hour or so, so that left me alone on the couch with Chloe.

Now, just because I don't believe doesn't mean those shows don't freak me out a bit, and being alone now watching I'd have to say was kind of "on edge", as it were. It wasn't long after I heard the upstairs water for the shower turn on when there came a light "knock-knock-knock" at the front door. My initial reaction was "what the hell, really? It's almost 10:00 p.m. go home…" but soon an uneasy feeling came over me. Why the knock? Our doorbell glows and in the dark and without the porch light it would be extra obvious to anyone there.

I paused. I couldn't really just ignore it, our front door has a big beveled glass panel and anybody right at the door could see in enough to see someone was in the family room watching TV. It would be pretty rude for me to just sit there and not answer it. "Knock-knock-knock", again from the door. I glance down at Chloe and she was gone. My gazed followed her usual path to the front door expecting her to be on her way there as she normally does. Nothing, she wasn't there.

I stood up to look around the room better and found her, crouching by the back door like she was wanting out. However, she never asks to go out like that. She always comes and licks my hand or puts her head on my knee. This was totally out of character for her, and I have to say heightened my anxiety. "Chloe, crate!" I said. She just turned back to look at me like "hell no lady, ain't movin.."

I yelled up to my husband, but if he was already in the shower I knew there was no chance of him hearing me. "Knock-knock-knock." About that time a car drove down our street and cast just enough light on the door to where I could see the silhouettes of two small children through the glass. I instantly felt relief. It was just some kids, probably a couple of my neighbors on their way back home that wanted to stop by and show me their costume or something. I headed to the door and looked back to make sure Chloe wasn't going to follow, what a great watchdog I thought to myself as she just sat there.

I turned on the porch light when I got to the door and sure enough, I could see thru the glass that it was a couple of pretty small kids. A little late for such young ones I thought and I began to wonder about what kind of parents would let their kids run the streets that late at night. I only opened the door enough to where I could block Chloe's escape if she decided to grow some balls, which was only about two feet. What struck me immediately as odd was the kids weren't wearing any costumes; they were in normal street clothes. Also, no customary "Trick-or-treat!" either. I began to feel very uneasy again.

It was a girl and boy. The girl, to my left, was older, I'd say about 11 or 12. I could tell she was blonde, but I couldn't make out any distinct features as our lights are from high above and on columns at the front of the porch so most of the light was coming from behind them. I had not opened the door wide enough for any light from inside to hit them directly. The boy was younger and about a foot shorter, I'd say 8 or 9 and looked to have light brown hair.

The girl very politely spoke up,

"Ma'am, can we please come inside and use your phone to call our mom?":

As she spoke something in the pit of my stomach was telling me something was wrong. What kid, even at that age doesn't have a cell phone of their own these days? I couldn't remember the last time I'd had anybody asked to use my home phone.

"Um… hun, don't you have a phone of your own you can call your mom on?" I asked.

This was things really got weird. Both kids turned to look at one another like they were going to say something to one another, but neither ever spoke. They both turned back to me and the girl said:

I have to admit there were two competing feelings going on inside me. The first, that of a mother's heart that wanted to help these two small children get to their mom. The other, a sinking fear in my gut that was keeping the other feeling at bay. It was then I noticed that during the short conversation I'd already opened the door a few extra inches which I was completely unaware of doing.

"Honey, why don't you give me your mother's number and I can call her myself."

Another pause and they again looked at one another. After a short moment, they turned back to me and the

girl said, "Ma'am, my little brother has to use your bathroom. Can we please come inside while you call our mom?"

And with that last statement the little girl moved closer towards the door like she was going to just walk right in, as if I wasn't there.

As she did, she stepped into the light coming from inside the house and I got my first real good look at her. Solid, jet black eyes, that's all I could see. That motherly instinct was gone and replaced by terror I don't think I've ever felt that terror, in my life. I could feel every hair on my arms and back of my neck standing at attention. I closed the door to where just my face was able to stick out. The little girl stopped and again pleaded,

"Please Ma'am we're really scared and alone out here. We HAVE to come inside. Please help us!"

Then, like on cue, both kids began to whimper and cry.

That's when the fear took over and I shut and locked the door.

"I'll call your mom if you give me the number," I shouted thru the door, "but I'm not letting you in my house!"

I could still see them stand there on the porch, just staring at me through the beveled glass pane. Part of me wanted to run upstairs to my husband, but the bigger part didn't want to lose track of where they were. That would have freaked me out even more to not know where they were.

After what seemed like forever, but probably only a few seconds, I decided I'd call my neighbor that lives across the street. As I made my way to the side table by our couch to my phone, I glanced at the back door, Chloe was nowhere to be found. We later found her in the guest room under the bed. When I got to my phone and started to look for his contact info, it was only then the kids stepped away from the door and began to walk to the street.

As they did I walked to the door to get a better look to see where they went, still not calling my neighbor. If you get close enough to the glass you can see out enough to make out peoples shapes, but you can see much detail. Of course, standing that close to the door would make you pretty obvious to anyone outside looking in. From the door, I could see that the kids were still standing under the streetlamp nearest my house, staring at me. As I lifted the phone to my ear after calling, only then did the kids start walking down our street. I met my neighbor out under the lamp once he was out there, but the kids were nowhere to be seen.

Like I said, I don't believe in any of this stuff and had never even heard about black eyed kids before talking to my friend. What I really think (what I have to think) is these kids were just out yanking people's chains on Halloween night. But I will say this for them, they were good. Really good at it. They scared the s*** out of me & my dog.