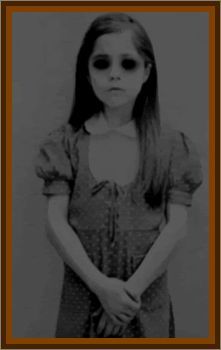 A paranormal investigator is appealing for witnesses after a resurgence of sightings of an eerie entity known as the black-eyed child.

Lee Brickley is scouring the Staffordshire beauty spot of Cannock Chase after receiving claims the girl, who has coal-black pits for eye sockets is making appearances again some 30 years after she was first spotted. Brickley, who is the author of UFOs Werewolves & The Pig-Man: Exposing England's Strangest Location - Cannock Chase, received the latest report a fortnight ago.

The sighting, which he shared with Huffington Post UK was as follows:

On Saturday 13th September, my wife and I were walking though Cannock Chase near to Stile Cop with our dog. Once we had entered the woodland, and the road was no longer visible, we started to hear the giggling noise of a little girl. To our amazement, a child, no taller than 3' in height appeared as if out of nowhere further up the path in front of us. We stopped dead in our tracks after noticing her eyes had no colour. Her head was tilted to the side in much the same way it would appear if she had been hung.

She stared at us for around five minutes before running away into a densely grouped area of trees. My wife wanted to follow her, but I was having none of it.

An earlier description of the girl mirrors that of those chronicled in the early 1980s, the Birmingham Mail reports.

... Around 2 months ago my daughter and I were walking through Birches Valley (an area well known for it's spectral sightings) when we heard the screams of a young child. I couldn't tell if it was a boy or a girl, but they definitely seemed in distress and sounded very close to us, so we instantly started running towards the noise.

We couldn't find the child anywhere and so stopped to catch our breath, that's when I turned round and saw a girl stood behind me, no more than 10 years old, with her hands over her eyes, like she was waiting for a birthday cake. I asked if she was okay and if she had been the one screaming, she then put her arms down by her side and opened her eyes, which is when I saw they were completely black, no iris, no white, nothing. I jumped back and grabbed my daughter, when I looked again, the child was gone. It was strange really, I knew something was going to happen, even before it did, I just had a weird feeling...

In my opinion, the black-eyed child seems to be some kind of demon.

While it might seem like a standard spectral encounter, almost all the reports involve the child leading people towards potentially dangerous situations. I have received nine different reports in the last two years from seemingly credible witnesses. During interviews most of their stories have been very similar. I'm also appealing for more reports, so if anyone has more information, I ask they get in touch as soon as possible.

Indeed in a post last year, Brickley spoke of his aunt's encounter with a black-eyed child back in 1982.

Then 18, she was on Cannock Chase one evening when she heard a little girl shouting for help. He wrote:

She stumbled upon a dirt track and caught sight of the 6 to 8 year old girl, running in the opposite direction, shouting help mommy help. ... by now it was getting dark and the little girl had reached an area of very densely planted thick and bushy trees. She turned around to face my auntie, looked her dead in the eyes, and then ran off into the dark, compact woodland. At this point, probably very wisely, the decision was made to give up.

Speculating that the sightings could be related to the Raymond Morris child killings in the 1960s, Brickley adds: In my mind it seems likely that even if my auntie had continued to chase the little girl, she would never have caught her, because it wasn't a child at all, but an evil force, planning to do away with my own family member.

Often children, with eyes that are solid black with no differentiation between sclera, pupil, or iris, and are occasionally reported to have blue or bluish tinted skin like that of a corpse. Those who report encounters with them often feel that the children were somehow supernatural and extremely dangerous though they could not explain why.

Cannock Chase has a long history of eerie happenings, Only on Cannock Chase do the sightings consistently happen during the daytime.