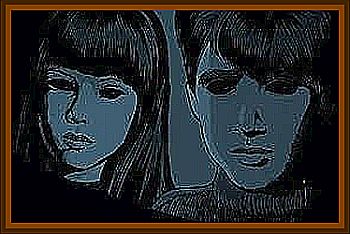 At about 10:45 p.m., on a warm night, 18 year old Carris Holdsworth was walking to her apartment from a friends house in Lisburn, a city in Northern Ireland near Belfast.

Her apartment was in a bad section of town and as she approached she noticed 2 teenagers, in hoodies and jeans, standing in her yard with their backs to her.

Of course, she was immediately wary and put her hand in her purse to grab hold of her pepper spray. As she was sneaking around the corner the 2 kids turned, simultaneously, to face her, which really freaked her out.

She says she felt raw fear when she saw their faces. However, Carris had her pepper spray in her purse and she was still alert enough to defend herself, should the kids approach.

Instead, they seemed able to read her mind.

No need for that, the older one spoke, calmly and maturely:

We just want to borrow your phone, miss.

Carris said they looked just like 2 normal kids, until, that is, she saw their eyes.

They were pitch black. No trace of white or pupil at all.

She felt she was in terrible danger and had to get away.

Running for her door and fumbling with her keys, the kids following close at her heels, the boys continued to ask to use the phone.

Please Miss, my mother won't be happy if she doesn't know where we are.

I wanted to obey them at first considering that they were young, but seeing their eyes took me away. I just had to get away from them both and I knew if I obeyed them I was going to seriously regret it, Carris said.

Carris managed to make it inside her apartment and locked the door. But just as she was about to sit down with a cup of coffee, there came a knock.

When she ignored it, the knock came again and she immediately felt a sense of overwhelming terror. When she peeped out the peep hole, there they were, both boys staring at her.

Just let us in to use the phone, he said. We won't hurt you. We have no weapons to hurt you with.

Carris opened the door and ordered the BEK to leave her alone, locked everything up tight as a drum, and called a friend. When the friend arrived the boys finally hightailed it out of there, but not before she too, felt an overwhelming sense of danger.

Carris soon moved to another neighborhood but says:

I always check through that peep hole before I go to sleep, I don't know exactly what those boys were, but I do know they meant me harm and that they weren't human in any way.

I still get scared thinking about it.