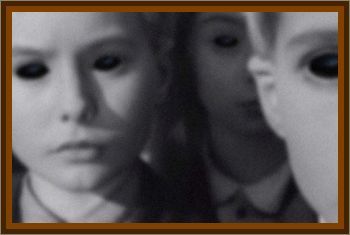 Are there beings or people among us whose sclera, pupils and iris are completely black? We will refer to them as beings, because at this time we really don't know who or what they are. There are numerous eye witness accounts of people like this in almost every location you can imagine, and from many corners of the Earth.

Below are some common characteristics of black-eyed beings discovered from examining eyewitness testimony:

Most are boys, and most are reported to be in their early to mid teens, dressed normally and unremarkable except for their adult speech and black eyes.

They always ask to get IN... into the car, into the house, into wherever you are, and they often get increasingly insistent and demanding when it seems that they are going to be denied entry. Apparently there are certain laws these beings must follow, such as being invited in. What's interesting is that this law requiring permission is known to apply to supernatural evil, such as demons or vampires. If laws ruling supernatural interference did not exist, then all of humankind would be in utter chaos and terror, and society could never develop to the level of what it is today.

Sometimes the adult or child dresses in attire to fit into the local population, but odd variations can also cause the black eyed person to stand out. Eyewitness accounts have stated that the clothing is either overly neat as though they are from a by gone era, or have strange color combinations.

Black eyed beings may dress in black or dark clothes.

When black-eyed kids approach adults they do not act shy like normal children. Instead, they are often quite forceful about what they want from the adult and may try to intimidate or persuade. They may be verbally forceful in demanding entry into a home or a vehicle on a public street, but apparently they do not become physical.

Evil is a common characteristic that eyewitnesses often sense from both black-eyed children and adult beings. However, this feeling is not experienced by every eyewitness.

In public places such as restaurants or airport gate waiting areas, often people will not sit anywhere near them especially after making eye contact.

It is possible that some (or all) of these beings do not have a home, and are roaming the Earth endlessly. One eyewitness who was alone with a man in an elevator late at night asked him where he was going. His curt response was NOWHERE!

These beings have been reported by people world-wide, and are not known to originate from any particular location on Earth.

One eyewitness was in an elevator with a black-eyed being. The following day he checked a security camera videotape but it did not record the presence of the black eyed being in the elevator. Only the eyewitness was seen alone on the videotape.

Solid form, unlike ghosts or other disembodied entities, eyewitness accounts have not spoken of transparency. These black eyed beings appear to be solid and can speak verbally, although this does not negate a supernatural origin.

Some accounts indicate that at least some of these beings have olive colored skin. Akin to MIBs

Eyewitness accounts of these beings often take place at night or inside buildings. Perhaps they cannot tolerate direct sunlight.

Black-eyed adults could be related to the "Men In Black" MIBs who have also appeared with pitch black eyes to intimidate UFO witnesses. A MIB often appeared to those who make it past a close encounter of the first kind. There haven't been any new accounts of MIB visits in recent years. Perhaps these black eyed beings are of the same race as the MIB, who may now be unemployed.

In black eyed beings, apparently the sclera is black as well as the pupil and iris. Witnesses are probably not seeing the retina directly. Humans have the classic red eye in photographs as a result of flash photography. To see into the eye of a black eyed being would probably require a similar intense on axis light source. However, if eyewitnesses can actually see a black retina as some have claimed, then the retina of these beings must absorb light even better than the eyes of human beings.

Late at night in the headlights of an oncoming vehicle on a highway deer, opossums and other animals have eyes ( retinas ) have a green or red color. This is a retro reflection from the animal's retina. It is similar to how a reflector on a bicycle or driveway marker reflector works. Human beings have a non reflective retina, reflecting back only about 1% of the light that enters the eye.

One might dismiss these strange black eyed people as a rare genetic mutation, except for one simple fact that apparently no one talks about, If both the sclera is black and the vitreous humor inside the eye is black as well, these beings would almost certainly have to be blind since no light could reach the retina through black vitreous humor.