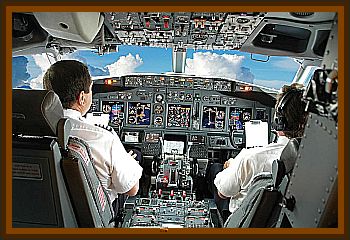 The 2 pilots reported the sighting to the Air Traffic Control Center at Atatürk Airport, Istanbul, the local Haberler website reported.

An unidentified object with green lights passed 2,000' to 3,000' above us, the pair reportedly said, adding then it disappeared all of a sudden. We are guessing that it was a UFO.

The local Hurriyet Daily website reported the pilots as saying that the UFO was seen around the Turkish city of Istanbul’s Silivri district, during a flight from the resort town of Bodrum to Istanbul late Thursday.

The pilots also said the UFO was spotted when the plane was flying at around 17,000' at around 11:30 p.m. on May 19. The plane landed at Atatürk Airport around 30 minutes later.

However, the General Directorate of State Airports Authority said it did not spot any image in its radars similar to what the pilots had described.

This is not the first time, pilots report of such sighting.

U.S. President Obama’s former pilot Andy Danzinger described in a 2015 interview of his encounter with UFOs.

Danzinger said many pilots had shared UFO stories with him, claiming virtually all pilots believe in UFOs.

So far, Egypt has found human remains, wreckage and the personal belongings of passengers floating in the Mediterranean about 180 miles north of Alexandria, but is still searching for the plane’s 2 black box recorders that could provide valuable evidence on the cause of the crash.

Until now all scenarios are possible. So please, it is very important that we do not talk and say there is a specific scenario. This could take a long time but no one can hide these things. As soon as the results are out people will be informed.