Near Miss Over Ireland 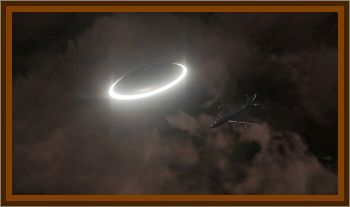 The following is a report by the captain of a 737, filed as a near miss.

The UFO angled off to the port side and a huge wake turbulence was experienced as the aircraft was violently shaken. The outside temperature rose to 164° centigrade/327° fahrenheit, as the huge UFO scorched through the air, as shown on the systems display digital readout.

This lasted for about 15 seconds. The UFO angled off to the port side and a huge wake of turbulence was experienced as the aircraft was violently shaken. The only other phenomenon that can cause such an effect is lightning.

All of this was witnessed by the British Midlands Airbus crew, who also experienced the wake turbulence from the triangular object. The UFO headed southeast at great speed. When the 737 landed, the crew could not raise the speed brakes, which are on the leading edge of the wings, more than a quarter of the distance up.

They were then requested to go to Stand 132 by the air marshall. The aircraft was examined, and the wings were found to be badly damaged, as if dented by a hammer. There was aircraft skin damage and also hydraulic damage to the speed brakes caused by the UFOs wake. The pilots were told to go to the lounge and await further instructions.

Soon afterwards, they were sent home for 2 days.