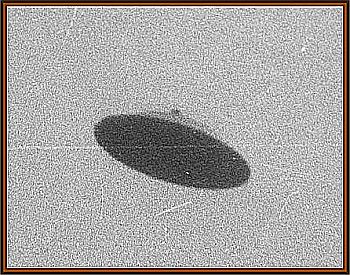 11 members of the 4925th Test Group Atomic, witnessed a UFO northwest of Kirtland AFB, NM, in broad daylight. Heights 25,000' to 30,000', described as about the size of a golf ball at arm's length with approximate shape of the flying wing, tan in color to brown on the edges. Horizontal flight, extremely high speed, heading northwest, then turned north.

The Armed Forces Special Weapons Command constructed 2 operational sites after World War II. One was known as Site Able, located in the foothills of the Manzano Mountains, just east of Sandia Base. Construction on Site Able started in 1946, with the first operational facilities activated on April 4, 1950.

The area to east of the sighting position in this series of incidents and the time frame are very close, close enough for inclusion in the possible Nuclear Connection Projects file. On February 22, 1952, Site Able was renamed Manzano Base.

These formerly classified documents, were discovered on the Blue Book microfilm site by researcher.

Colonel Osmond J. Ritland welded these pros into a highly sharp team. If there ever was an elite outfit, the 4925th was it.