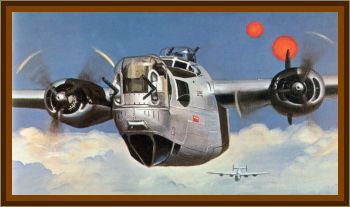 They were cigar shaped, glowed red and could turn on a dime. Which ruled out even the most sophisticated rockets of the time.

It was nearly the end of World War II. But for the airmen of the 415th Night Fighter Squadron, it felt more like the beginning of War of the Worlds.

Lt. Fred Ringwald was the first to see it. He was riding as observer in a night fighter piloted by Lt. Ed Schlueter, with Lt. Donald J. Meiers on radar. It was a late November evening in 1944, partly cloudy with a quarter moon. They were roaming the Rhine Valley just north of Strasbourg on the French/German border when Ringwald said:

I wonder what those lights are, over there in the hills.

There were 8 to 10 of them in a row, glowing fiery orange. Then Schlueter saw them off his right wing. They checked with Allied ground radar, but they registered nothing. Thinking that the lights might be some kind of German air weapon, Schlueter turn the plane to fight, only to have the lights vanish.

At first the men said nothing, fearing they'd be ostracized. But then the sightings spread through the unit.

On December 17, 1944, near Breisach, Germany, a pilot was flying at approximately 800' when he saw 5 or 6 flashing red and green lights in T shape. The lights seemed to follow him, closing in to about 8 o'clock and 1,000' before disappearing as inexplicably as they came.

Then on December 22nd, 2 more flight crews sighted lights. One crew, near Hagenau, reported 2 lights in a large orange glow, seeming to rise from the earth to 10,000', tailing the fighter for approximately 2 minutes.

After that, the lights, peel off and turn away, fly aloog level for a few minutes and then go out. They appear to be under perfect control at all times.

And then there was Lt. Samuel A. Krasney's experience:

A wingless cigar shaped object, glowing red, just a few yards off the plane's wingtip. Lt. Krasney, justifiably spooked, instructed the pilot to attempt evasive maneuvers, but the glowing object stayed right next to the jet for several minutes before it flew off and disappeared.

Inspired by the comic strip Smokey Stover, in which Smokey, a firefighter, would often declare:

An Associated Press reporter broke news of the Foo Fighter sightings on January 1st, 1945, and theories about their origins quickly abounded.

The sightings were flares, or weather balloons or St. Elmo's Fire, a phenomenon where a light appears on the tips of objects in stormy weather. But the members of the 415th rejected all those theories. Flares and weather balloons can't track planes like these objects could, and they'd seen St. Elmo's fire and could distinguish the two.