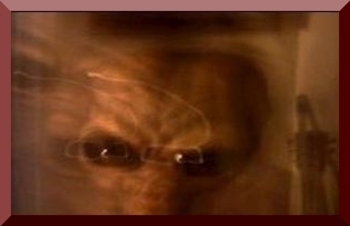 The witness is a middle aged woman who recalls a terrifying ordeal that happened over 40 years ago.

She made her report via telephone. She recalls waking up in the middle of the night and feeling thirsty. She went downstairs to get a drink of water. At the time her brother and mother were asleep in the house. She noticed a bright light shining through the curtains in the living room. She at first thought that a fire may be occurring. She peered through the curtains and saw a large flaming object hovering over the trees in her front yard.

She immediately felt terrified and had an electrical sensation over her body. She previously felt this sensation when a lightning strike hit a tree close to her house. No lightning was present on the night of the sighting. She also smelled a strong ozone odor. She only watched the object for about 20 seconds and ran upstairs quite terrified.

At the time she was about 16 years old. She tried to waken her mother, but could not. This is characteristic of UFO encounters where seemingly some people cannot be awakened. She did not sleep the rest of the night and the next morning she saw her family at breakfast. None of her family members knew that anything happened.

She was surprised by their reaction. She was afraid to investigate the area where the object had been sighted. She was not aware that anyone else had the same sighting. This is not unusual considering that the sighting occurred in the middle of the night in a rural area. The witness began having dreams, flash backs, of encountering large grey creatures that would walk through the walls. These dreams occurred early on and were very terrifying.

I have had two interviews with this witness. I am impressed with her sincerity and the fact that she recalls the above encounter in great detail after 40 years. She has only shared her experience with a few close friends and family members for fear of ridicule. This case occurred around the time of the famous Michigan sightings that Project Bluebook labeled as swamp gas. Dr J. Allen Hynek later wrote that the swamp gas explanation was made to quiet the press.

I believe the witness's account of her sighting. I am not sure what happened beyond the actual sighting. I don't know if she really encountered aliens. The electrical disturbances and ozone odor suggest that she was in the vicinity of a magnetic or strong electric field and that ionization was occurring. Little additional investigation can be performed unless more witnesses step forward with a recollection of the same event.