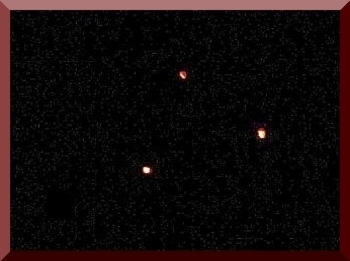 From late October 1972 to March 21, 1973 I was in Gravesend Sea Training College, training to go into the Mechant Navy. I had been assigned to T class.

One night we were having a bit of a friendly fight between ourselves, then one of our roommates got all excited and started shouting:

And started pointing out of one of our dormitory windows.

We all rushed to look to see what he was pointing at, there approximately 200' to 250' above our football, soccer, field were 3 big white lights.

The single light was nearest to us with the other 2 beside each other just behind it, the object seemed to be triangular in shape, also there seemed to be no noise, the object was also not moving it was just hovering.

We looked at the object for several seconds, I am unsure how many, when it suddenly began to move forward at what appeared to be a slow speed and passed over our our building. Our roof was a flat roof and had no windows so we had to cross to the other side of our dormitory this would have been about 20'. When we looked out of the window opposite to the first one we could see the object still moving in the same direction, it seemed to be at the same height and speed.

I am not sure how far it traveled but it would at a guess be a ¼ to ½ a mile, suddenly it climbed at a huge speed. When it climbed the object seemed to attain its speed instantly, it stayed on a horizontal plane not climbing as with a coventional aircraft, also it left no trail that we could see. The object took about 3 or 4 seconds to be out of sight, it never altered course it just shot up at a great speed at about 45º from a horizontal slow level flight path.

May I point out that this is the first time I have reported this in writing anywhere, although I have told people at times since it happened. I also have flown light aircraft, sailed in the Mechant Navy for 18 years so am able to judge distances to some degree. I was also told this sighting was reported in the local newspaper although I do not know if this was true, this is about an accurate description I can give.