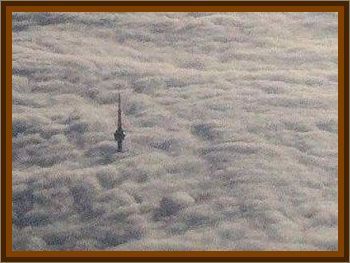 At approximately 10 minutes out from Charleston, at approximately 10,000', I saw off to the left side and below, 2 very large black antenna rising from 2 different clouds. They appeared to be single pole antenna without motion rising 500' from the top of the cloud.

I could clearly see below the cloud that it was not land based which would have been impossible at this height. I waited to be the last passenger off of the plane and I asked the pilot if he saw two antenna protruding from the clouds off the left side on the plane and if he knew what they were.

There were 2 more off to the right side and we have no idea what they were.

The pilot did not take any evasive action. The objects were stationary and below the aircraft.