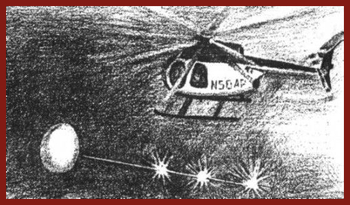 255 was also aware of the aircraft in the same part of the sky. They took up a heading for the aircraft and reported back to the Dublin Airport air traffic control tower that the craft was descending lower on the horizon, as if landing.

Also, the craft was further away than they first thought. 255 had the craft in sight all the time, but his last transmission back to the tower was that:

That guy must have landed. We have lost sight of him. The helicopter then got a call to go to an incident in Blanchardstown, in west Dublin, and that ended the transmission.

The contact's claim was fascinating, but some sort of support, if not verification, was needed.

Given the accuracy of data supplied by the contact before and since this incident, and the fact that the Howth area had seen repeated UFO activity in the past, this event merited further enquiries. Here was an incident which, if true, occurred in controlled airspace on the approach to Dublin Airport. The presence of an unknown, hovering craft in this area would be of some concern to air traffic controllers, which it was, as they tasked a law enforcement aircraft with investigating it.

What if the unidentified craft was being flown as part of a terrorist plot? Previously, when Ireland had the temporary presidency of the European Union, the Irish Aviation Authority, IAA, had established a Temporary Restricted Area, TRA, around the Irish capital. Flights within the TRA had to be authorized specifically by a senior official in the Security and Northern Ireland Division of the country's Department of Justice, Equality and Law Reform. The TRA was put in place by the IAA with the consent of the then Minister for Transport, Seamus Brennan.

The only exemptions to this security measure were state aircraft and flights by the Irish Coast Guard. While this restriction was lifted at the end of the country's EU presidency, it demonstrates how seriously the nation was taking the threat of terrorism from the air.

In the post 911 era, such an attitude had not changed and at the time of writing it still hasn't. If the unidentified craft had no flight plan and no transponder, the possibility would also have arisen that it was possibly smuggling. People, weapons, illegal cash or drugs might have been coming into the country, yet none of this is mentioned in the reported radio exchange between the control tower and the helicopter. It should be noted, too, that the object was further away than was first thought, and that it was seen to descend, as if landing. Yet the only thing to land on, beyond Howth, is the Irish Sea.

How could it have landed there? If the unknown craft was an aircraft in distress and it had crashed into the sea beyond Howth, then either the control tower or the helicopter would have taken action by contacting the rescue services.

The report and the subsequent written statement by our contact didn't mention anything in this regard. Nor did any media reports in the following days mention any searches or rescue activity off the Dublin coast. The Garda Air Support Unit's, GASU, assets including the aircraft involved, which has since been replaced, are flown by military pilots stationed at the Irish Air Corps base at Baldonnel, south Dublin. It was to the GASU at this base that we sent a written request for information, but we received no response. It seemed unusual, whether the incident had occurred or not, that no one would issue even a brief statement on behalf of the GASU. Even if our contact's claim was incorrect, a brief comment from the unit could have put the matter to rest.

Its lack of response necessitated, instead, repeated queries to be forwarded to both garda headquarters and the Air Corps. The approach to Garda headquarters prompted a reply, with our queries having then been passed back to the GASU at Baldonnel, which then issued a 1 page statement.

Sergeant Donal Doyle wrote that he could find no reference to a Garda aircraft answering a request from Dublin ATC, to help identify an aircraft on or about August 21. The GASU, had on occasion been asked to identify aircraft that had strayed into the Dublin terminal control area without contacting the ATC tower by radio beforehand. On these occasions, the aircraft turned out to be hot air balloons that had been blown into controlled airspace by adverse wind conditions. Initially, this seemed reasonable. However, a hot air balloon would not normally have been flying in that area and at such an hour.

More importantly, Doyle passed no comment on one key query, the unidentified airborne object's loss of altitude, with nothing but the Irish Sea below it.

Three weeks after contacting the Air Corps, its press officer responded that he had found no record of the Air Corps having been notified about the sighting.

Commandant E. Murphy also stated that on the pertinent date and on the previous and subsequent days, there were no records of any reports from the watch manager at Dublin Airport about the sighting.

Interestingly, Murphy mentioned in his reply that a query had related to an aircraft picked up on radar that night. It was never stated that it had definitely been detected in this way, as neither we nor our contact knew for sure. Commandant Murphy went to the effort of speaking to the GASU crew who had been on duty on the night in question.

None of its members could recall the incident, with the pilot remembering, instead, another event that had occurred around the same date. However, this incident had involved a hot air balloon to the west of Dublin Airport, flying outside the Dublin control zone. Having contacted the Air Corps and the Garda Air Support Unit, the only conclusion to be reached was that the incident simply didn't happen.

If an aircraft of any sort was seen by a Garda aircraft to descend over the open water of the Irish Sea, or if even a flare was spotted by its crew, then the very least that should have happened would have been that either the Irish Coast Guard or the Royal National Lifeboat Institute, RNLI, or both would have been alerted. This did not happen, according to Ger Hegarty, the divisional controller of the Coast Guard's Marine Rescue Coordination Centre, MRCC, in Dublin. The files of the MRCC held no references either to the Coast Guard or the RNLI having been informed about any such sighting.

The only question remaining concerns a fact we hadn't included in the queries that were presented to those who piloted and crewed the Garda aircraft, because there should not have been any need to mention it, if the incident did not occur, if the Dublin Airport control tower and the helicopter did not discuss an unknown aircraft over the Howth area, then how was it that the conversation was recorded?

The recording made for very interesting listening and it confirmed the authenticity of our contact's original claim that the episode had, in fact, taken place. A transcript of the relevant portion of the supplied recording is reproduced below:

Tower: If you could go up there at high speed, I have traffic just swinging around Howth.

255: Affirm. See him descending now. He is just gone below the horizon.

255: Roger. We will keep heading down that direction anyway.

A silence then follows between the control tower and the helicopter, which lasts over a minute and a half, then:

Tower: Oh! It's further out than I thought.

255: That guy appears to have landed. We have lost sight of him now at this stage, and, eh, we have another call in the Blanchardstown area. Not above a thousand [1,000 feet].

The identity of the intruder and where it landed, if, it did land, remain unanswered questions. Why there was no follow up by the authorities is also a mystery. The use of the word guy is unusual in aviation jargon, and its used to represent an unknown aerial object prompts the idea that all of those involved may well have known what the object wasn't, that it was not merely a conventional aircraft, but that they would not openly say so over the airwaves. After all, if there was even the remotest possibility that what was seen was an aircraft in distress, or a flare from a boat in need of assistance, then the sea rescue authorities would surely have been contacted immediately.

According to the Air Corps, the watch manager at Dublin Airport did not file a report in relation to the incident, while the aircrew could apparently recall other incidents, but not this one. Officialdom decreed that it did not happen, yet the whole episode was recorded.