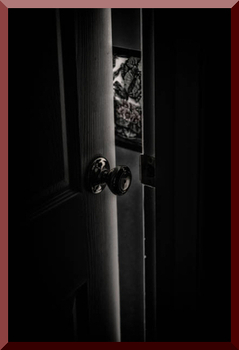 I've never seen a UFO, but may have one better than that.

I was visiting my grandfather at his house on the mountainous outskirts of Superior, MT, this was the old railroad signal maintainer's house.

I made this visit every summer for 2 weeks, in this case I stayed 3 weeks, but for the last time.

The 1st or 2nd morning I awoke early and noticed that the bedroom door was ajar an inch. But this was impossible as my grandfather was religious about closing and locking doors, especially at night.

Nor was there any possible way anyone could have gotten into the house.

So I kept myself awake all the next night, and, oddly, the door did pop open roughly after midnight. It also appeared that the hall light was on, because I could easily see the light from the opened door.

But the door did not open much more than an inch, unless, that is, I was extremely still and relaxed over several minutes, then it would gently open to 4" to 6".

If I allowed myself to approach sleep, but not quite, 6" could be pretty well assured.

During all this, my grandfather slept in the same bed between myself and the door. He had a bad case of apnea and made thunderous snoring noises and had violent nightmares all night.

After about 6 nights, I asked him if we could swap, this would put my head only about 3' from the door and facing just a little into the hall. Still, I could see very little all night and the door never opened over about 4".

Remember, it seemed as if I was safe enough as long as I was awake, but it was also fairly obvious that whatever was watching was not human and could be a serious threat.

It had something in mind, obviously, and it planned to come closer at the first opportunity.

I first entered that half awake state on about the sixth day and was in it perhaps only 30 to 40 seconds.

There were 5 creatures peeking in the opening. They looked exactly like the classic Grey, except that I could only see their heads as they leaned over each other. I thought they looked like little circus men, but had never heard of Greys or space aliens in 1959, and I was only 11.

Now, after they'd been caught in this way, the door was kept much tighter. I thought perhaps they'd been frightened completely away, but no, they came again each night, but the door never again opened more than an inch.

Their boldness had been diminished. But I was still very curious myself, so I stayed.

In fact, I decided to stay longer than my 2 week plan.

I was not frightened too much, but quite frightened at the thought of going to sleep, because I didn't know what they might then do.

But staying awake all night every night for 20+ days can be difficult, so I ended up drifting off again.

Again, I abruptly opened my eyes. This time the door remained nearly shut as usual, but something else was happening. There was a column, or zone, of vibrating light, highly energetic, but without sound.

It appeared that the creatures were transporting into the room with some sort of energy field. I've heard of abductees reporting a bluish light. I don't remember any actual color, but I do remember the strong, twitching movements and concentrated light about 1' wide and roughly 4' high.

This is my big story. It is quite true, not exaggerated one iota, and I am therefore fully convinced of the Greys' reality. I got very bored with the game after that, was a bit frightened, and so I went home. I didn't tell the old folks about it because I did not expect to be believed.