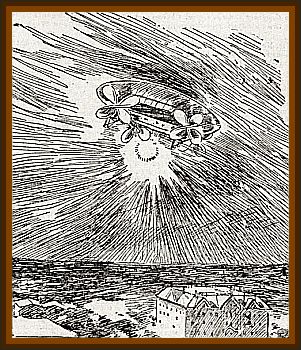 Several Hastings people report that an airship, or something of the kind, has been sailing around in the air west of this city.

It was first noticed sometime last fall when it was seen floating in the air about 500' above the ground, and after standing still for about 30 minutes, it began to to circle about and took a northerly direction for about 2 miles, after which it returned to its starting place and sank into oblivion.

Since that time it has not been seen until last Sunday evening, when it was observed standing nearly still, a few miles west of Hastings and seemingly about 800' in the air.

At first sight it had the appearance of an immense star, but after closer observation the powerful light shows by its color to be artificial.

It certainly must be illuminated by powerful electric dynamos for the light sent forth by it is wonderful.

At 9:30 p.m. last Monday, January 25, 1897, the large glaring light was seen to circle around for a few minutes and then descended for about 200' circling as it traveled at a remarkable speed for about 2 miles and then slowing up it circled for fully 15 minutes, when it began to lower and disappear as mysteriously as it had made its appearance. A close watch is being kept for its reappearance.

On February 5, 1897, the Omaha Bee reported that the UFO had been sighted again, this time at Invale, a tiny farm town 40 miles south of Hastings, near the Kansas state line. The UFO was seen by people returning from a prayer meeting.

The UFO seemed to be conical shaped and perhaps 30' to 40' in length, with a bright headlight and 6 smaller lights, 3 on a side, and seemed to have 2 sets of wings on a side, with a large fan shaped rudder, the Bee reported.

The Invale witnesses claimed to have heard rumbling engine noises and the voices of the airship's occupants.)