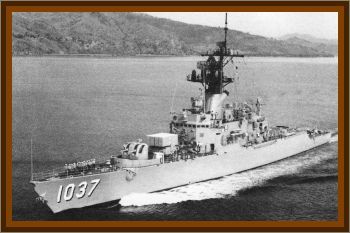 I was a seaman aboard the USS Bronstein (DE 1037) as a port lookout. We had broken away from the carrier, as we often did.

We were on our way to North Vietnam and going through the Philippine Sea when off to the starboard side of the ship the port lookout reported to me he saw something bright and big.

I immediately stepped back and grabbed the big eyes, which are binoculars that are 3' long and can see 18 miles. What I saw was amazing.

It looked like a dirigible only it was over 2000' long with a white cloud around the middle of it hovering over the water.

As we got closer and closer to it, it was directly parallel to us. It was a mother ship.

As soon as the starboard lookout radioed to the bridge what he was seeing, it disappeared. After it disappeared it left a round rainbow of red/yellow/blue and green.

Then we pulled up beside it on the port side and I could almost reach out and touch it.

The officers were there with 8mm cameras filming it.

It lasted for about 20 minutes and dissipated.

To the best of my recollection this is how it happened in 1971.